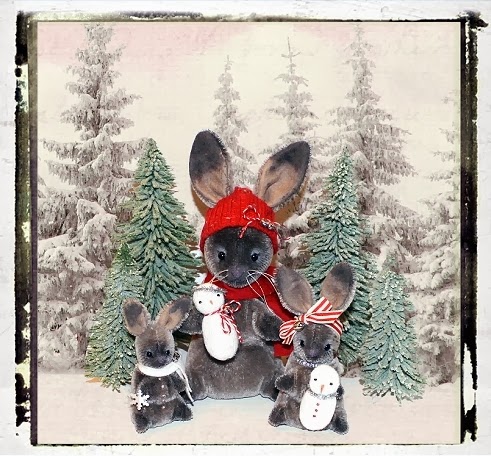 Yes I know it's been a while again since I posted.  I was busying working through the holidays, and then company came.  But we were about to go on to 2014 and I was READY!  I had plans, and ideas for new pieces and a new layout in mind for my website....it was going to be good.  I was going to start off the new year with a bang!

Life has a funny way of derailing your plans though.  It started because of shopping out in public I am sure.  I got that nasty flu that was going around this year.  Surprisingly R got it as well.  He never gets sick.  Then for the next 5 weeks we passed it back and forth.  I would think I was finally over it and bam...the next day sick again.  After dealing with that for so long, naturally I developed a severe sinus infection.  Such is the way of having flu and allergies.

One morning a few days into the new year I woke up and my ear was leaking a thin liquid.  My headache/sinus pressure had reached an all time high.  I struggled through the day and finally about 7 at night it had gotten so bad I thought my head was literally going to explode.  R was working late, it was freezing cold outside, but I bundled myself up and drove to the closest ER.  They said from the pressure in my head, I had "perforated" my eardrum.  That is a nice way to say it burst.  The next day the other eardrum followed suit.

They referred me to an ENT.  I went to him a few days later, and truly disliked this man.  He was one of those doctors that doesn't listen to you.  I don't like that.  It's my body, I know what is going on and maybe you will too if you listen.  He said he didn't think I had a sinus infection, but that I clench my jaw at night.  Really?  So what is this water leaking from my eyes and ears?

Anyway a CAT scan and an appointment for allergy testing later, I was less impressed.  I had told the man several times I had severe allergies that at times incapacitate me.  On my last visit he asked me if I had considered the possibility that I had allergies....um well yeah since I told you three times...please listen to me...

Last week I was scheduled for the allergy test, but I woke up the morning before and brushed my teeth.  I had a strange premonition that my crown was going to fall out....and by golly later that night it did.  So instead of allergy testing I made an emergency run to the dentist.  My regular dentist...who I truly adore, he is such a good dentist...was out of the office so I saw the other one.  I hadn't previously met her, but she was quite nice and through the course of conversation I discovered her husband is a doctor who specialized in allergies.

I now have an appointment with him.  Apparently he is supposed to be quite nice, a very good doctor and wonderful at giving shots.  (YAY!)  He also has a program to desensitize you to what you are allergic to over the course of one day.  ONE DAY!!!  From what I understand it's not the most pleasant day, and it's very long but I can endure it if it takes away the misery of many days.  They have a nice room set up for it too, to try to make it as pleasant as such a thing can be.

So through all of these things....something good has come.  Hence the silver lining in a very dark cloud.  I have always maintained that miracles are not about what happens, but the timing of what happens.

Clearly this difficult road I have been on has led me to this place.  I am in great hopes that this works.  It feels right somehow even though I have not yet met this doctor.  I guess I just know it in the same way I knew my crown was going to fall out.  Perhaps soon I shall be functional again and can get things made, and the house cleaned and all the things I need to do.

I have a feeling blue skies are finally on the horizon, but for now....my head is throbbing and I need to take my allergy meds and go to bed.  I shall try to keep you updated on my progress.

Even though I am a month late, I hope you all have a wonderful and prosperous new year!