Hi everyone,  I hope you all had a lovely Christmas!  I am sorry I haven't been posting but I have been having serious computer issues.  They should be resolved next weekend when we hook up the new one I got for Christmas. 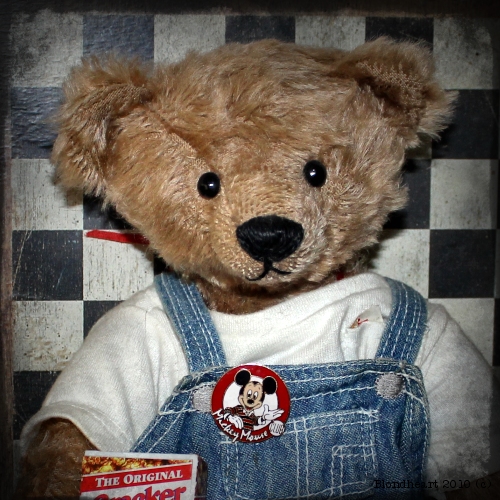 It's been crazy lately.  R and I have been passing the flu back and forth, and in between I have been making the house ready for Christmas.  I have been decorating, shopping, doing cards and wrapping  for two weeks.  As a result I haven't gotten a single bear done.
But I am taking today off to work on a very special bear before I start doing some major cleaning this week.  I have company coming soon.

Today is kind of special though, since it was 30 years ago today I finished that very first bear.  I wanted to show him to you, but he is packed away in an old steamer trunk in the garage and it's nearly impossible to get to him right now with all the tubs of decorations out.
So instead I thought I would show you Fenway.  Fen was made right around the halfway point in my career.  But he is a very important bear because he represents a turning point for me.  Fen was that bear that was finally what I wanted to make.  That look that I wanted and had taken me so long to get to.  It's not that the bears for the first fifteen were bad, they simply didn't define who I wanted to be as an artist.
You have to remember back then we didn't have as many books, or the internet...so information was pretty scarce.  It was all trial by fire back in those days.  Now, artists have the advantage of endless information, photos and tips on how to make things and they can achieve the look they want much sooner.
It's been a wonderful journey, and I wouldn't change the time it took me to get to where I want to be.  I have learned so much, built a good business reputation, traveled the world, been able to help charities and the best part...what I do makes people happy...including me!  You can't ask for more than that!  So today I am taking one shining day off of getting ready for the holidays and working on three 30th anniversary bears.  You will get to see them soon hopefully.
Then it's back to cleaning!  For those of you who made special requests for pieces...they are coming...I swear!
Hugs, K. <3
Posted by Kelly at 1:03 PM 5 comments:

I always hesitate to make posts like I did yesterday. I am well aware that many people only like to read happy posts. But my blog is called a stuffed life, and while it's about my life making collectible stuffed toys...it's also about my life which is stuffed with lots of things. Some of those things aren't pretty, happy or good. Life is like that, it's messy and hard sometimes. I just throw it all out there. Once in a while it's nice to not read something happy and pretty...and just know you're not alone in whatever kind of garbage you have gone through.

I want to thank everyone for your very kind comments. But I also want to express my shock at what I have learned by how many of you told me that either you or someone you knew heard this same over qualified to be parents response to adoption. I honestly thought this was something weird that just happened to us, but apparently it's not. It's a comment that many, many people have heard. I had no idea.

I have gone from sad to outraged that people are being told this so often. How can anyone be over qualified to be a parent? If you are over qualified for the toughest job on the planet...then the system should throw open the doors and welcome us in to choose all the children we want. Dear God, there are children that need loving, safe homes where they will get the attention and care they need. So what is going on? Why are they being allowed to sit in orphanages or being passed around to foster parents when they could have a decent, steady home that so many of us are willing to provide???

Many people told me it's all about the money, and I believe this is true. But I also believe this is completely sick. Who designed this system? And where can I go to give them a piece of my mind?

Between all the places that my blog posts are posted to, I have heard countless stories since yesterday. I am heart broken for all of us, and all the children that didn't get the benefit our homes and sharing our lives. Something has to change. It can't be all about the money, it has to be about these children and what they need.
Posted by Kelly at 12:35 PM 4 comments:

Labels: Adoption, adoption system, over qualified to be parents

This afternoon as I putting up more decorations I turned on the TV. I knew that I wouldn't be able to focus totally on a program so I started watching "The Talk." Part of their discussion today was on adoption. They said there are 130,000 children in the system that need homes.

13 years ago I was told I would never be able to have children through the conventional method. R and I decided to try in-vitro. I never had the procedure. I took the Clomid, which makes you crazy. Also at the same time I was house hunting. Three months worth...which also makes you crazy. When you do in-vitro you have to get your period by a certain date each month based on your schedule. If you don't they have to move you back to the next month. That's extremely stressful, combined with the Clomid and the house hunting, I didn't get a period nearly the entire time thanks to the stress. I finally couldn't take it anymore and we decided to look into adoption instead.

On the show they said that these children need good homes. Yes they do, but it's not that easy. When R and I went to adopt we couldn't afford a private adoption through a lawyer at that time. We had just bought the house and it was very expensive to adopt that way so we looked into other ways. Not to mention that in Colorado it's all for the birth mother and she has the right to reclaim the child at any point.

We went to Lutheran Family Services. We were told we would never be given a child because we were over qualified. Yes really. We had been married ten years and had a good marriage. R had a decent and steady job, and I was a stay at home artist. We had never had any problems with the law or psychological issues. So we were basically too good to be true and no one would ever believe it. We met with this kind of resistance everywhere we went.

It was also suggested that we be foster parents, but I could not bring a child into this house, get attached to him or her and have to let them go. That to me would be more heart breaking than never having children at all.

As the years have gone by I have come to terms with it. We had our hopes raised many times only to have them dashed. I had to come to terms with it or be heartbroken every few months to a year. But it doesn't mean that I don't feel sad and still wish I had children. I do. In fact it's the greatest heart break of my life. I don't know if I would have been a great parent, but I certainly would have given it my very best. I know R would have been wonderful at it. He is that type of person.

It's very hard to watch shows like I did today and to hear them say that there are so SO many children in the system that need homes, to know we have a home and love to share and can't do it because of something so ridiculous as the suspicious nature of people who think we were over qualified to be parents. That we must be hiding some deep dark evil secret. I try not to let it bother me, I try to believe we simply weren't meant to have children...but every once in a while it's just so hard.
Posted by Kelly at 2:54 PM 8 comments:

I wanted to share this with you, because these guys are both really good and really funny!  I like them better than the Lady Gaga original!  Not bad for a cappella!  I was part of A Cappella in high school...and it was one of the most terrifying things I ever did, so kudos to them!
Posted by Kelly at 1:54 PM 2 comments:

I just wanted to give you a quick update.  I have been crazy busy getting the house ready for Christmas.  Lots of decorating and things to do.

I have also been having a bit of computer problems.  I think I have it solved...maybe.

I am hoping to be able to get some work in tomorrow.  Stay tuned!
Posted by Kelly at 11:35 PM No comments: 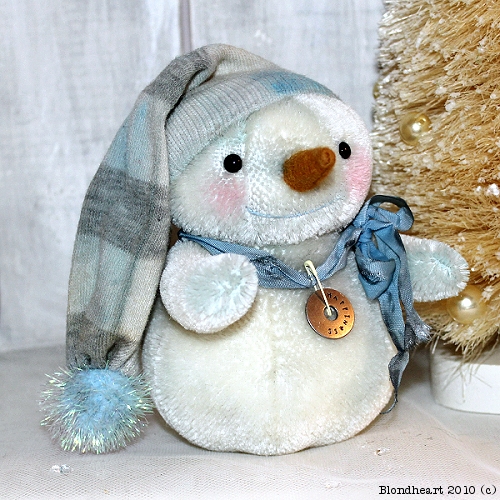 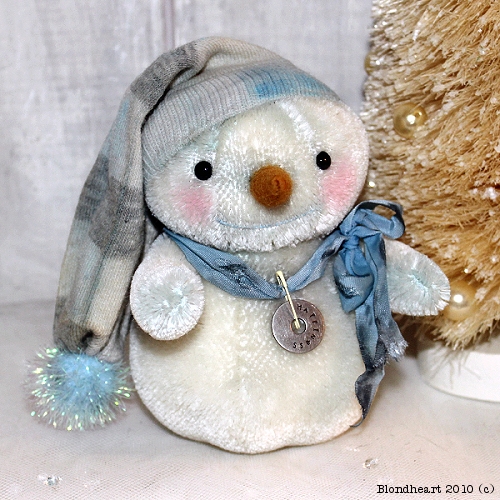 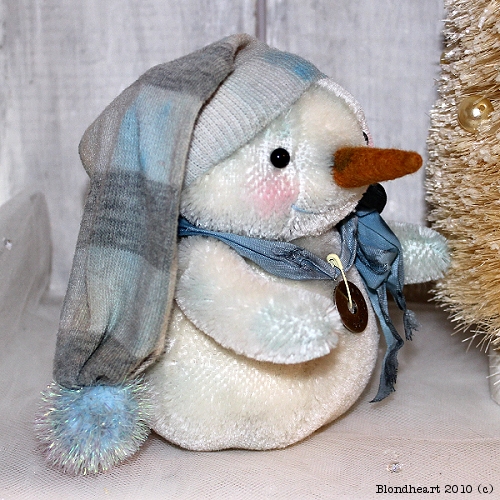 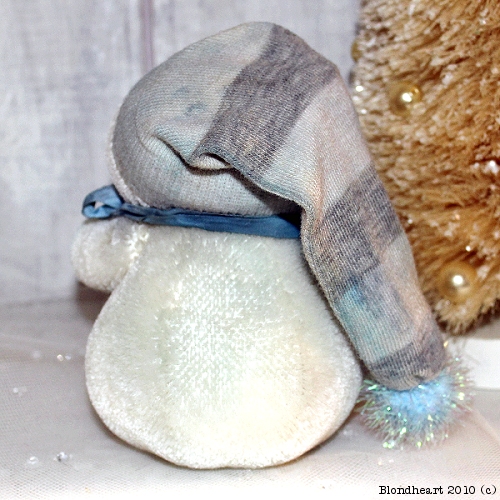 December has rolled in with sparkle and shine.  I am feeling better and sleeping so well!  I finally got back to work, and have finished Chilly.  He is a little more distressed than the previous two snowmen.  I really like him, and he is a little more Winter and little less Christmas specific.
I do love the Christmas holidays.  Everything seems brighter and friendlier.
If you would like to visit Chilly you can do that on the Animals Page of my website....er well nevermind, he has been adopted! =}
There will be more pieces soon!  I have to decorate the tree first though!
Posted by Kelly at 12:37 PM 6 comments: