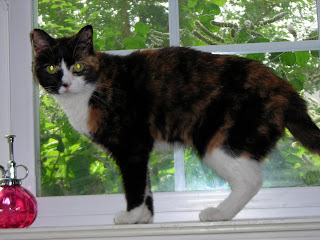 I was hoping to have a lot of nice cheery posts in a row since anyone who might stumble upon this and read it doesn't know me and will think I am very depressing. But I am not going to be able to do that just yet. It's been a tough month. Yesterday I had to have my dear sweet Shelby cat put to sleep. Now I know ultimately it was the right thing to do. She was old and had gone blind but she was doing very well, anyway until Saturday. Saturday as near as I can tell she had a stroke. If it wasn't that, then something else went horribly wrong somewhere, and she was having trouble standing up, eating, breathing and even being aware of where she was. So yes, it was the right thing to do because I couldn't let her suffer, and I am very certain she probably wouldn't have made it more than a few days longer. The one in this who I am sad for is myself. But that's always the way of death, it's the ones left behind that feel the pain. When someone or something shares a big part of your life for 16 years you can't help but feel a horrible hole in your heart and your life. As far as cats go, she was incredibly intelligent and intuitive to my wants and needs. She was funny with a cocky attitude right from the moment she strolled in our door despite malnutrition. For the first few weeks she slept curled around the food dish because she was afraid it might empty and not be refilled. Once she figured out that there would always be food, she set about becoming queen of her little kingdom. Even the giant chows always deferred to her wishes. She learned a couple clever tricks, being able to say "mama" and "milk." She even won me a camera once by taking first place when I entered her in a cute kitty contest. I miss my friend. Anyone who has never had a pet, or doesn't have a natural affinitiy for animals wouldn't probably understand being friends with one. But it's definitely possible and a shame that some people miss out on that special type of friendship. You never get that kind of unconditional affection from another human being no matter how much they might love and care about you. I will miss that little scrap of fur, and even though I have two others, there will never be another Shelby. Rest in peace, I will miss you! Shelby ~ 1991-2007

Hi Kelly,
Sorry to hear about the loss of your Shelby kitty and your friends. That's a lot to handle in such a short time!
Sending lot's of teddy bear hugs and prayers your way!!
JeannieB

Thank you so much. It means a lot to me.