Hello and welcome to the Christmas Tea For All The Toys Blog Party hosted by Bearbits! For your enjoyment, I present the following original story:

In a far corner of the attic sat a dusty old trunk filled with forgotten things. Inside the trunk tears welled up in the shoe button eyes of a little teddy bear. Evangeline didn't want to cry, but she couldn't help it. She had been waiting decades to be wanted and loved again. 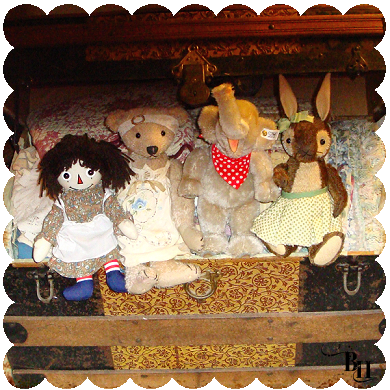 She felt the soft cotton hand of the Raggedy Doll pat her paw. "Please don't cry Evangeline" she whispered. Bingo the elephant reached over and swept away a tear that had escaped with his trunk. His own bottom lip quivered a little. He knew how she felt.

For the past hour they had listened to the Holbart children downstairs in the kitchen, excitedly making out their Christmas lists for Santa. Timmy had wanted a new electronic game player. Sue Ellen wanted an MP3 player, and some cash cards for an online game. Tory, being the youngest had wanted a robotic dog since she wasn't allowed to have a real one.

Children never asked for simple toys like them anymore, everything had to be electronic or computerized these days. But every year they laid awake in the trunk listening to the kids in the house and hoped that by some small chance they would wish for a bear, doll, elephant or rabbit. Sadly it never happened.

Bitsy Bunny sat in the far corner of the trunk twirling her ear, lost in thought. The magic had gone out of Christmas for the four of them long ago, but she was determined to get it back this year. She wasn't sure how, but she would do it! They had waited long enough, and if the children of the house weren't interested in playing with them, they would just make their own fun!

Many years before, they had belonged to Annabelle Hobart, the children's grandmother. They had been her prized possessions when she was a child and they went everywhere with her. They had wonderful tea parties and picnics, played dress up, and traveled with her when she had gone abroad. But they had been packed away in the trunk when Annabelle had grown up.

When Annabelle had her own daughter, Clara, who was now the children's Mother, she had played with them a few times. But they had mostly sat on the shelf as decoration. When Clara had grown up they had been packed away in the trunk again and completely forgotten.

Bitsy finally stopped twirling her ear. She had an idea! She began rummaging around in the trunk. Finally she pulled out a little tin tea cup. She waved it in front of her friends noses.

"We could sneak down on Christmas Eve after everyone has gone to bed and have a tea party in front of the Christmas Tree!" She exclaimed.

Evangeline looked thoughtful. "Do you really think we could?" she asked.

"Why not!" said Bingo, "The children go to sleep early so Santa will come. We wouldn't get caught. I sure would like to see a pretty tree all lit up again!"

Raggedy Doll peered at the tea cup. "Let's do it!" she said, and began to dig through the trunk with Bitsy for the rest of the things they would need. 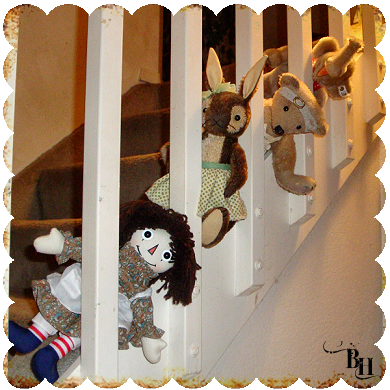 When Christmas Eve arrived, they made sure to wait until everyone was asleep, then pushed open the lid of the trunk. They took the tea set and a small table and chairs they had found, and crept quietly down the stairs. They started setting up their tea party with great excitement. They hadn't been out of the trunk in so long that everything looked absolutely sparkly and magical.

Suddenly they heard a voice above them, "Well hello there! Did Santa bring you?" it said. 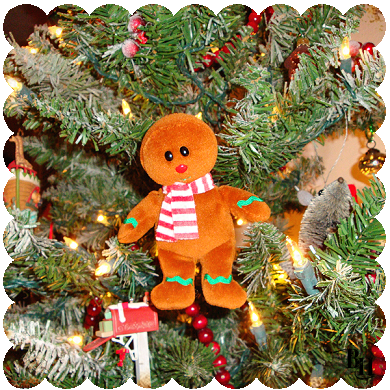 The four of them looked up startled. They didn't immediately see the source of the voice and were afraid they had been caught. They soon realized a tiny stuffed gingerbread man was hanging on the tree.

"No Santa didn't bring us, we came down from the attic where we had been quite forgotten. What are you doing all the way up there?" asked Bingo.

"Ah" said the little gingerbread man, and nodded knowingly. "I used to belong to Sue Ellen when she was very small, but she lost interest in me I am afraid. Mrs. Holbart just hangs me on the tree every year now. Then I get packed away with the ornaments."

"Oh that's terrible" said Evangeline. "Would you like to join us for tea and cook...er cupcakes?" she asked, quickly hiding the cookie she was about to eat so as not to offend their new friend.

"I would be delighted!" exclaimed the gingerbread man. "Allow me to introduce myself, I am Yum Yum!" He tried awkwardly to bow while hanging on the tree.

Bingo lifted the Raggedy Doll up and they helped Yum Yum down. 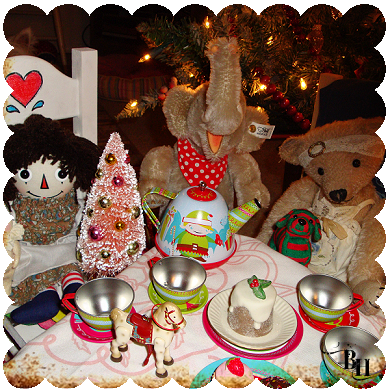 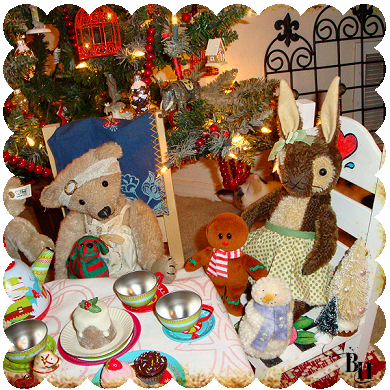 They talked and laughed all through the night, losing track of time. In fact they were having so much fun that they didn't even notice Santa Claus peeking in through the window.

Santa looked at his list and then back to the toys having their tea party thoughtfully. He tucked the game player, MP3 player and robotic dog back into his sack. He snuck in and blew some magic dust towards the five little toys and snuck back out quietly without making a sound. Santa smiled to himself for being able to leave one of the best presents of all at the Hobart house and got back into the sleigh and flew off into the night with a jolly "Ho Ho Ho!"

The first rays of sunshine peeked brightly in through the windows on Christmas morning waking the children. They ran downstairs noisily,excited to see what Santa had brought them. Mr. and Mrs. Hobart, awakened by the sound of their children followed right behind them. 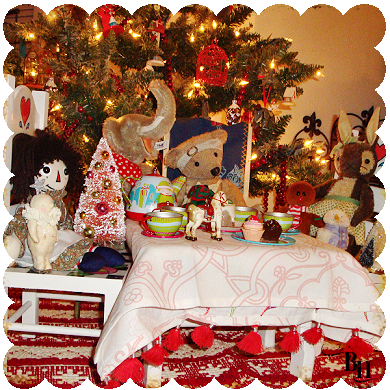 A strange sight met their eyes when they got to the tree. Beneath it was a tea party scene with a bear, doll, elephant and a rabbit. Even the little gingerbread man had somehow fallen off the tree and looked as if he had joined them.

Tory ran forward with a squeal and grabbed up Raggedy Doll and Bitsy Bunny for a hug. Sue Ellen sat down and lifted a tiny tea cup, she held it out in front of Evangeline enchanted. Then she spied Yum Yum and said "Yum Yum! I wondered where you had went! I've missed you!" Even Timmy picked up Bingo and smiled. "What a great elephant!" He thought.

Mrs. Hobart knelt down. "These toys used to belong to your Grandmother Annabelle" she said. "But how did they get down here?" Then she looked up at her husband and smiled. "You found them didn't you John?" Mr. Hobart scratched his head, puzzled. "No Clara...I didn't, I swear I didn't! Santa must be responsible!"

Mrs. Hobart smiled, she didn't believe him of course. He was the only one who could have brought the toys down from the attic. She was delighted too, her children were taking an interest in something that didn't require batteries. The children begged for stories about their Grandmother as they played with their new treasures. They had completely forgotten about the things they had asked for.

As the years went by, the toys weren't packed away again. They were passed on to many more generations of Hobart children, and they gained new friends along the way. Every year it was tradition that they were set up under the tree for a tea party. Stories were passed down about Annabelle Hobart, and the toys that had been given their own special Christmas gift of love by none other than Santa himself! 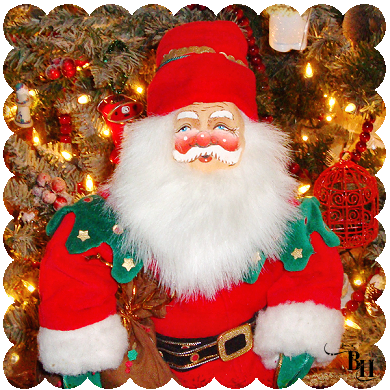 Merry Christmas to you all, and don't forget to spread a little love and cheer to those who may have been forgotten!

That was adorable, what a wonderful story. I enjoyed reading your Tea party post....Have a beautiful day! Hugs, Jennifer

So cute, what a lovely story and artwork!

Have a great Christmas time!

What a wonderful story! I loved it, thank you!
Lynda and the Friendly Company of Bears

Kelly, that was such a wonderfully heart-warming story!!! Thank you so much for sharing it.
Heaps of Hugs,
Cheryl

The magic of Christmas, thanks for reminding me. I love your story

Hi Kelly, What a charming story! I love that the toys took the initiative and made their own fun. And then finding out how Santa came along and gave them a wee bit of help. Thanks for the story and thanks for 'coming to tea'. It is a pleasure having you as one of our partiers!

How beautiful! Your story should be printed! It's wonderfully written! Enjoy the day and visit our tea party soon!

I love your Xmas story!! well done!
Your pictures are beautiful and magical!

what a wonderful story teller you are,just wonderful,it must have taken you ages,mine was just a bit of fun ,all i had time for in the end,but i thouroughly enjoyed yours

Hi Kelly! actually Walter is a newer steiff I bought him either last year or the year before that...Walter isn't really his name either but I thought he looked like a walter. : ) I'm a huge teddy collector and steiff I would have to say are one of my favorites to collect. Thasnk you for stopping by for a visit! hugs, Jennifer

Thank you all for visiting and your kind comments! I went and visited all the other blogs too, such creative people and lovely bears!

I love all your toys and your story! Wonderful tea party! Have a great weekend. Twyla

Kelly, thanks for stopping by and commenting! Your story and pictures are wonderful! Thanks for sharing!

Kelly, what a beautiful post. I really enjoyed your writing, I read your other blog too. You have a great story telling spirit.
I love it!
Hugs,
Margaret B

Hello, Kelly! What a beautiful story!
I liked all the guests very much!!!
Hugs, Irene

What a heartwarming story Kelly sorry for being late x Juliet

Hi Kelly! I loved your story!!

I finally got mine up, some life events prevented me from... well... functioning for the last two weeks... but I am back, so if you want to check out my tea party, please do!

I will soon be posting the images for your christmas party. I'm just trying to space it out a little and not overkill everyone since I'm late.


I recently came accross your blog and have been reading along. I thought I would leave my first comment. I dont know what to say except that I have enjoyed reading. Nice blog. I will keep visiting this blog very often.