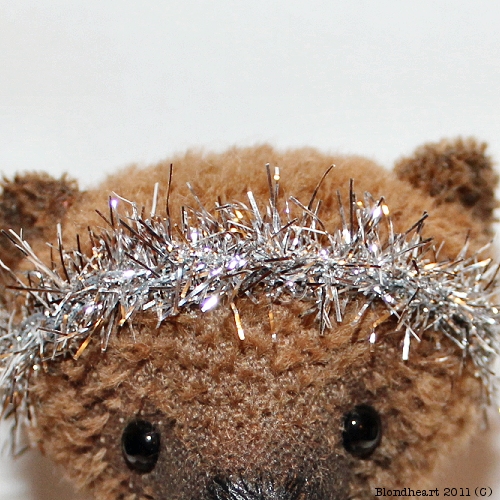 As promised I am giving you the first sneak peek at the items for the website update on the 2nd.  I have these two done, and another one in the works.  There will be more to come, and I will be giving you more sneak peeks later in the week.  I am finding myself enamored of things that sparkle and shine...and ring this year!
As for my knee...well lets start with last Friday.  They told me that they would be referring me to an orthopedic specialist but it has been my experience that unless you are knocking on deaths door the medical community doesn't move real fast on things, so I took a vicodin and flopped into bed around 5:30 am, and it took about a half hour before I fell asleep.  At 8:35 am the phone rang.  A woman on the other end of the line who was entirely too cheery for that time of morning told me I needed to be at the doctors office by 9:30 am because the doctor was going to see me between surgeries.  She also told me not to eat or drink anything in case I needed surgery!  Um what?  My sleep deprived, vicodin addled brain had a hard time processing all of that..but by some miracle I made it on time.  (And without coffee!!!)
The doctor showed up some 45 minutes later still wearing scrubs and a hair net.  He poked, prodded and twisted my knee and announced that he wanted me to get an MRI and sent me home.
Now the doctor who did the x-rays the day before at the Urgent Care place told me my knee cap was absolutely broken.  He showed me the x-rays and pointed out the wedge shaped divot in my knee with the piece sticking up that fit into it.  I am no doctor but it looked pretty well broken to me.  The Orthopedic doctor wasn't so sure.  He thought I had a multiple fractures and possibly soft tissue damage.
Yesterday they called and told me it's not broken at all and it's just soft tissue damage but I still need an MRI.  I asked them what that divot shaped piece was then?  They didn't know, and that the MRI would reveal all...I have visions of a lab tech in a fortune teller costume doing this MRI at this point.  I go in Monday afternoon for that.
I don't see how there could be soft tissue damage since where it hurts is directly on top of the knee cap and there is no tissue there.  It's just skin over bone.  But again I didn't pay a bazillion and a half dollars to go to medical school and I do like the idea that it's not broken after all because I am hoping that means no surgery.
While I am getting lots of work done, I can't hardly stand sitting still for such long periods of time.  I am also completely over limping around and being in pain whenever I walk.  All I do know for sure is that it's not healing or improving in the slightest.  Thursday it will be three weeks since I initially did it.  I won't know anything until next week, so I will let you know when I know.
In the mean time I will be busy sewing away...until then!
Hugs, K. <3
Posted by Kelly at 2:04 AM

Love the sneak peeks and can't wait to see the rest. I find that I'm also enamored by things that sparkle and shine and yes, ring this year as well. Good luck with your knee and as bad as it is imagine it was your elbow instead.

Hang tight, Kelly! I know how awful it is to wait and wait for medical appointments and answers while suffering so much with pain. Keep distracting yourself with sewing your wonderful creations--maybe watch a movie while sewing, too. I'll be thinking about you!

What, they didn't even give you crutches for that limp?

Love the sparkly shiny anyway (are you sure it's not the drugs making them so appealling? ;o) )

You really must feel fed up with it all, its a lot to put up with. I hope things go well for you.