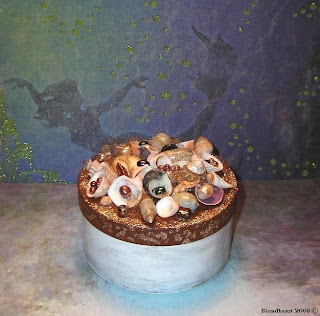 I received quite a few E's asking about the Mermaid Box I mentioned, so instead of just posting a pic like I usually do, I am going to go ahead and tell how the idea came about. The picture doesn't really do this piece justice.

When I was a kid I had a poster of a mermaid I pulled out of a magazine on my closet door. I always wanted Chicken Of The Sea tuna because it had the mermaid on the can. There was something so exotic and magical about the idea of these beautiful creatures living in the ocean.

I am 1350 miles from the nearest ocean and I am fine with that. The truth is I am not really that fond of water. However I am fascinated with it. There is still something magical about the things that live in this mysterious realm. Maybe it's because so much of the ocean is largely unexplored, the things living there are so diverse and far away from how we experience life, and maybe it's because every year we discover a couple hundred new species on this planet, and 99% of them are in the ocean. So just maybe even though common sense dictates that there can't really be any mermaids...the ocean is so vast and unexplored that we hold out that tiny shred of hope that this creature really could exist.

I went to Old World Market a couple weeks ago and they had these very fat bottles filled with a potpourri of white shells and blue sea glass and a bit of raffia all topped by a cork and a tag that said "Ocean." I have to confess the thing that really prompted me to buy it was the bottle itself. I love bottles and boxes and containers of all sorts. But when I got the bottle home I had to pop the cork and let the scent out. It smelled much better than I imagined it would. It also smelled much better than any ocean I have ever visited...but something about the entire thing inspired me. Maybe I let an artistic little genie out of the bottle at the same time I let the scent escape.

I knew I wanted to make something sea inspired. I dream of the sea in those cold winter months we have here in the mountains sometimes. So off I went to buy an assortment of shells and pearls and other fun things. When I got my haul my home I set it all out on the work table and took stock of it. What a treasure I had, much like I imagine a mermaid would bring to her home. But what was I going to make with it now that I had it? What would a mermaid do with it all?

I repeated that question to myself in a little more earnestly. What WOULD a mermaid do with it all? Well like all other mythical creatures she would naturally tuck her treasure away in some sort of chest, or box...hmmm. But what would that look like? Obviously our little sea dwelling miss would have to use what she had on hand. She would gather odd containers and adorn them with shells and pearls and seaweed and any other thing that caught her eye. Naturally it would be sparkly as well. (All mystical, magical things sparkle don't they?) So what I have come up with were Mermaid Boxes!

The one shown above is the first one. It's a diminutive band box 3 1/2 inches in diameter. The base is white washed with antique gold rubbed on here and there to give it that look of being aged on the sun dappled deck of a ship. The top of the box is rusted tin covered with an array of shells, pearls, glass beads, tulle "seaweed," and dusting of sparkley "sand." (This is NOT hot glued together...I don't like hot glue. I used a nice jewelry cement to make sure it was secure!)

I have a second box in the works that will be completely different from this one in color, shape and material...I am not sure how many I am going to make, but each will be unique and a great place to store your own trinkets and treasures! Look for them on my website and my upcoming Etsy shop!
Posted by Kelly at 2:08 AM