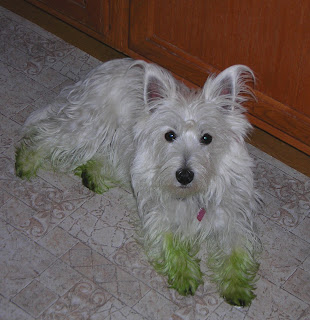 I have a West Highland Terrier named Jazzy. I posted her "Frankenpaws" pic above because I thought it was pretty cute. She had been chasing R while he was mowing so her feet are green.

Animals have senses that humans don't possess, although some have better senses than others. Jazzy tends to be a very smart little thing, much smarter than Buster, her big Cocker Spaniel buddy. Sometimes she just amazes me. Ever since she was a puppy she has always growled at animals on TV. Once she growled at a manta ray on a program I was watching about the ocean. Considering a manta ray is pretty far out of her realm of knowledge I thought that was surprising. But even more surprising was another night when she growled at an image of some amoeba shown under a microscope. How she could discern those were alive I can't imagine.

She never growls at people in animal suits or computer animations though. Only real animals. So she really gave me pause to wonder about something a while back. Now I have mentioned many times that I have a deep abiding affection for cryptozoology. Despite that, Bigfoot has never been of much interest to me to study, and I have never put much stock in it's existence.

But one night I was sitting in the recliner and Jazzy was in her appointed spot at the foot of it watching the big screen with me. We happened to be watching a show about Bigfoot simply because it came on after the other show I had been watching and I was too comfortable to get up to get the remote. I kind of got caught up in it, and started watching it in earnest. Towards the end of the show they played three different clips in succession of supposed Bigfoot sightings that various people had captured. The thing that really gave me pause was Jazzy, alert with eyes glued to the TV, growled at one of the clips, but not the other two. I backed it up and watched all three again. They were more or less similar in content and showing the supposed beast each time with roughly the same clarity. Again she only growled at the one.

I am not sure what to make of that exactly, but it has certainly opened my mind to the possibility that Bigfoot is out there and Jazzy was able to identify it along with two imposter's! *Grins*
Posted by Kelly at 6:29 AM

Such a lovely shade of green they look quite punk rock :-) your heart pieces are great too ,hugs juliet

A green bow would make the "outfit" =D Cute