The Scars Left By Lost Toys 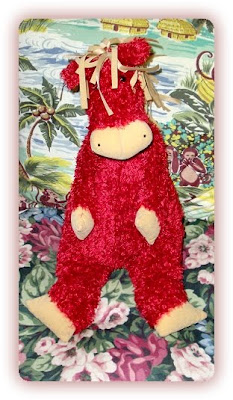 At some point we have all seen a child crying over a beloved lost toy they had brought along on a shopping trip or to a restaurant. Usually the parents are frantically trying to figure out where it was left so they can retrieve it. Maybe the parents look so hard for it because they don't want to hear their child crying...or maybe it brings up a memory of a toy lost in their own past.

This afternoon I had an e-mail from a customer who adopted Garbanzo and Mariposa, my little mouse. She told me a story about a little mouse that used to ride around in her pocket when she was a child and one day the mouse was gone. This is the second story of a lost mouse I have heard.

Some years ago I was rooming with another artist friend at a show and she told me a story about a little white Steiff mouse that she always carried around in her pocket. She said it gave her great comfort as a child to know it was there. But one day in a fit of anger, her Mother threw it in the fire. 40 years later a tear still came to her eye when she told me about it. She hadn't just lost a stuffed toy, she had lost a friend and something that made her feel safe and secure.

I spent the next few months scouring e-bay looking for a white Steiff mouse from that time period that was in good condition. I finally found one and sent it to her for Christmas. When the package arrived she called to tell me it had gotten there safely. I told her to go ahead and open it. When she saw what was inside she burst into tears on the phone. I wasn't sure whether I had done the right thing or not. I didn't want to bring up a bad memory. But she said she couldn't believe I had remembered the story she told and that it was the nicest gift she had ever gotten. Also that it was exactly like the mouse she had. I guess I did do the right thing.

Another friend once told me that when she went to college she decided she was a grown up and didn't need her old teddy bear anymore so she gave it to Goodwill along with a box of old clothes. She is over 70 now and she said she still regrets giving him away the most out of all the things she has let go of in her life.

When I was little my security stuffed toy was a little red leather dog. While my dog wasn't lost, he didn't survive to my adulthood. I carried him everywhere and always slept with him under my neck for some reason. I wore a hole through the leather after many years. Being stuffed with sawdust it all fell out when the hole appeared. Being made of leather, there was no way to repair him. I cried so hard at his loss that my Grandmother took me shopping to find a replacement. I ended up coming home with a little velvet Bagheera from the Jungle Book, which had just come out in movie form from Disney. Sadly after a few years Bagheera met the exact same fate as the little red dog.

I still have a small odd patch of rough skin on my neck from sleeping with them under it for so many years that no amount of scrubbing or lotion will soften. Aside from the physical scar, I still think about them from time to time. I have an inexpensive pellet filled stuffed horse that my Mom bought me a few years ago. She didn't really understand why I wanted it since it was cheap toy and not like the things I collect, but she bought it for me anyway. I was going to buy it, but she wanted to get me something that day, so that's what I came home with. It made him even more special that she bought him for me though. I am sure she probably doesn't remember the red dog. He is much bigger than my dog was, but so am I now. He has an elongated body and on rare occasions when I get extremely stressed I still put it under my neck to sleep. I suppose it's because he supports it a little, I have chronic neck problems both from work and that simply being the place where I carry my stress. That may very well be why I slept with those toys under my neck as a child too, I am not sure. Most women either carry their stress in their neck or their back. Aside from that, Chili Pepper (in the pic above) still offers a sort of comfort reminiscent of my little red dog. But I love him every bit as much as all my expensive artist bears and Steiff pieces.

It's kind of funny how these things stick with us. Sure they were just things, but those lost toys seem to travel on with us through our lives even as adults, and we mourn their loss. Sometimes I meet someone who thinks what I do for a living is odd. They don't understand the importance toys hold for so many even through adulthood. That's a large reason why I make the type of bears and animals I do. They have that well loved look. Many times I have been told when someone purchases a piece that it reminds them of something they had as a child, and you can see that they are having a memory of some beloved toy lost to time. Mission accomplished! I like being able to fill the empty niche that is left behind from our lost friends.

To this day I always watch for a little red dog, but sadly I have no idea what company made it so it's a nearly impossible search. I have never tried to make one, I don't know why. Maybe someday his doppelganger will find me anyway.

Hold tightly to your children's toys, even if they feel in a moment that they have outgrown them. A day will come again when they want the comfort they once offered, because inside all of us is lives that child that needs their old friend once in a blue moon.
Posted by Kelly at 1:19 PM

Oh so true. My 14 year old daughter has a blanket and stuffed bunny. She still takes them on holiday and this year I said don't take them, what if the case goes missing? She would not put them in the hand luggage and in the case they went, it happened....that case was missing. You could tell she was upset, long story short we got it back but it does show to treasure these things.

Oh this was such a wonderful post! I'm totally crying over the mouse you sent your friend! How wonderful was that!!!!
Hugs to you!

When I was little, my Mom took it upon herself to have a garage sale and sort through my stuffed toys. Inadvertently, she managed to choose the one stuffed toy that meant a lot to me to get rid of. A tan little dog in a blue dress and bonnet.

I still think about that dog to this day.

Aww, so glad you were able to reunite your friend with a lost soul from her past, but what a shame you haven't found another of your little friends yet.

I got a teddy the day I was born. When we lived in Nigeria he got damp, and stopped growling (I was about 18 months old at the time, so don't even remember the growl) I sucked my thumb and rubbed his arms whilst hugging him tightly to me when I went to sleep until I was about 10, however by the time I was 5 I'd loved all the fur off his arms, and the joints were in very dubious condition, so my dad gave him a 'retread' on both his arms and legs. So now I have a two-tone bear, with only the legs that move (and fragiley at that). He is so worn and has very little fur left (and yet was very furry when new, looking at photos), but he still travels wherever I do to live (he's now at 7 countries) plus a number of countries we've been to together on holiday. Thankfully he was rather too large to lose, I'm not sure how I'd cope without him beside me in bed!