A Heart Of Stone 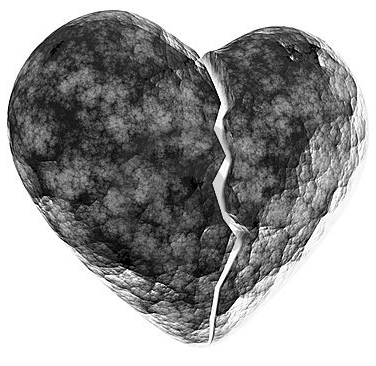 Many years ago before I met R I had a boyfriend who wasn't really very good for me.  I liked him a lot, but I knew it wasn't the best situation and I broke up with him.  To protect both of us I did it in a rather callous way and he accused me of having a heart of stone.  It hurt terribly when he said that because on some level I suspected he was right.  I never let him know how much it hurt though.
Last Saturday I fractured my nose.  You know I am clumsy!  It was such a bizarre accident and I couldn't do it again if I tried.  When I did it, it hurt but I laughed.  I laughed a lot.  In fact R didn't take it too seriously when I said I think I broke my nose because I was laughing so hard.  I knew it was broken though, I have done it twice before.  Then it started to bleed and he knew I was actually hurt.  From the outside I can appear pretty tough, and sometimes indifferent to things.
Today I wasn't so tough though.  In fact I turned into a giant sobbing puddle on the couch.  (Thank goodness a kind hearted friend knew and called me to cheer me up...and she did!)  First of all I had to take Ridley back to the dog rescue.  We had him a little over a year and a half and I know it was the right thing to do.  He has terrible separation anxiety.  I thought I had worked him through it but lately he had reverted back to his old ways of trashing the house when I go away.  He is also jealous of the other animals, and while he wasn't aggressive with them he would simply nose his way in between them and I.  Entirely too much of my day was spent on him.  I knew he needed a home where he could be the only pet and have all the attention lavished on him.   So I had to put my own feelings aside and did what was best for the greater good of everyone concerned.  I chose to do it while R was away because I felt it would be easier on him as well.  He knew I was going to do it.  The thing is I loved Ridley.  He was a sweet dog, and as I drove away the look on his face haunted me all the way home.  I had put on my stone face and hugged him, told him I was very sorry and then just left him...cutting him entirely out of my life for good.
When I got home, I returned a phone call that I was supposed to return last week.  I had recently told this person that when someone lashes out you when you don't deserve it, you have to just remember that they are afraid.  The irony is, today I did that very thing to that very person.  They said the thing that cuts me to the core...they said I made them nervous.  I have been told this before and it's like a knife through the heart every time someone says that to me.  I don't think I am so intimidating, but what do I know...I can't see myself from the outside looking in.  Maybe I am truly terrifying to people and I am just deluding myself into thinking I am a nice, open and compassionate person.  When I pressed them as to why, the answer really shocked me.  They said it was because of my PKD.  Make that a double knife right through the heart.  Yes I have this disease, and yes I know it will probably kill me someday...but no one has ever treated me like a sick person before.  It's not like it's contagious and it doesn't affect my day to day life that much yet.  Especially someone in that position, they are a doctor.  I thought about it, and I cannot stand the thought of making someone nervous, or putting too much pressure on them to do something they aren't comfortable with...so I called them back, put on my stone face and harshly told them I never wanted to go there again and that I would find someone else.  I don't know if it mattered to them or not because I didn't give them a chance to respond.  I simply said "see ya" and hung up the phone.  In truth they probably had nothing more than momentary passing confusion followed by a sense of relief.  But the thing is, I liked and trusted this person, and I hated the idea that I might have hurt them even though I probably didn't.  I felt it was for the greater good, but who knows maybe that's just a lie I tell myself to justify my actions.  All I know is I cannot be in the position to make someone nervous.  I just won't do it.  I don't know why I do that to some people, and it makes me afraid that is how I really am so I end up lashing out unfairly every time someone says that to me and cutting them out of my life.
I had one last small incident where once again I had to be very stoic today.  I don't even want to go into it.  I do these things with the intent of putting my personal feelings aside and doing the thing that is in the best interest of everyone.  To do that, I know that I have to come off as having a heart of stone, and being able to cut someone or something off completely without a care.
The funny thing about stone is...even though it's hard, it can break...usually when no one is looking.
﻿
Posted by Kelly at 9:22 PM

Labels: being callous, cutting things out of your life, making people nervous, ridley

Thank you Kelly.
I'm sorry you had such a tough day, but grateful that you had the courage to tell about it. So often blogs are only written about the joys of life , making readers feel even more that low times are not something everybody has to endure.
You have helped me to make the decision to end a relationship that is destructive to the other person as well as myself.
Hope today is a better day for you.
J

Sending you lots of love and a big hug al the way from the Netherlands...! I think you a very nice purson, I love to reed youre post..! And wait an see, in a few day's you will feel much better about yourself!!

Oh, I'm so sorry, especially about Ridley... it's so hard when a dog is pretty much perfect except for one thing... and it's a big thing. We had a dog exactly like that... but thankfully, my Mom was a stay at home mom, and our only other pet was an angry, aloof cat... but had we had any other dogs, or cats that wanted attention, it just wouldn't have worked.

... and really, stone breaks rather easily.

You are a strong person, not a cold or unfeeling one.

Thanks guys, I appreciate it.

Jenann, I do sometimes post about the less than pretty side of life. I am a real person and I put that all out there. I am glad you decided to end your relationship. We do get into these things sometimes and whether they are big or small in their destructiveness, it's always better for everyone to let them go if it's not good for the people involved. Sometimes the best way you can love someone or something is to let them go. That is why I had to let Ridley go to a different home that will be better for him. It's hard to let go though.

I am already feeling better this morning Jacqueline. Thank you for your kind words. I think everyone has those moments of self doubt. Even when we are usually very confident.

Heather...*hugs* Thank you! I am always so happy to hear from you when you post! How have you been?

Wow, that was a really crap day! Okay, you don't have a heart of stone, you are just able to think logically and compassionately, and you realised that Ridley's requirements weren't being met because of his special needs, it was only fair to give him the chance of a life where his every need was catered to, and to give your other animals a chance for their needs to be met too.

As for the doctor, well, I've been told I scare people too. I have no idea why, and my dear friends, while telling me, don't appear to be able to articulate why (maybe I scare them?! Who knows?!) I don't think this is a constant state of being, and I'm sure it isn't for you either, but wouldn't it be great to be (a) as perfect as they obviously are, and (b) to be able to see ourselves as others see us *sigh* Still, it definitely does hurt, and unfortunately, having built coping mechanisms, it appears that we don't care as we're dying inside. So, to that end (((((HUGS))))) from one scary lady to another

True...even stone can break. Sounds like quite the week. Hang in. I do love reading your blog and enjoy the honest posts. hank you.

hoo boy, I can't remember who I've updated and who I haven't... I'm losing it!

I'm strapped up to a heart "event" monitor for a month at the moment... I'm not sure what the last update I gave you was, but I'll shoot you an email. It's been a health adventure over here.

Over the few years I've known you one thing stands out to me, you're very intune with people and situations. You see things others don't. Take Ridley, you see whats best for him and everyone. I'd rather have one of you than a hundred 'hide behind the rose tinted glasses' kind. Glad you feel a bit better about things.

Oh wow Heather, I hope you're ok. By all means let me know what's going on!

Amanda, that is one of the nicest compliments I have gotten in ages. Thank you so much! =}

Hugs to you, Kelly! Thank you for telling me about this today. You are very sweet, no-nonsense, and insightful. I am glad I know you! :o)