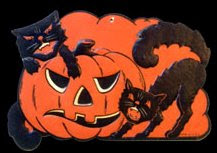 Here it is Halloween. It doesn't really feel like it. Of course it's been fairly warm the last few days so that's a good thing. I had company all weekend and despite my having a rough time of it with the flu, we still managed to have a good time and do some things.

Today everyone left and I was all alone. I just took it kind of easy and didn't do much other than laundry and dishes. I rested up and watched some TV. I watched the special History had on this supposed lost book of Nostradamus. They proved three times during the show that the book couldn't possibly have originated from him despite the fact that his name was on the cover. Although they kept asserting that it had to be his. It made no sense to me. The book had some rather cryptic pictures in the back that they managed to translate as being the prediction for the end of the world which conveniently coincided with the Mayan doomsday. Of course the Mayans never technically said that December 21st, 2012 is the end of the word, it's simply the end of a long count (the end of a planetary "wobble") and we align precisely with the middle of the milky way on that day and the "dark road" opens . The reason we assume that is the end of the world is because they never recorded anything about the 15th long count. But then again we don't even know for certain that is true since the Spaniards destroyed about 90% of their writings.

Now they showed the pictures, and I wasn't quite so certain of their translation of them. As we all know art is subjective...much like Nostradamus's predictions. I have always had a problem with that notion. They explain that he had to write things in riddle form because if they knew at the time what he was doing by way of prophesying, he would be jailed or worse. But I have to wonder, if the man had this much ability to see into the future and predict events with such supposed precision, why couldn't he "see" a way around the problem and find a way to tell us straight forwardly what to expect. Lets go a step further even and take a leap of faith and say that he could predict all this vague stuff we have applied to history and one has to ask oneself...why him? Why out of all the people on the planet would the powers that be choose to bestow this information on him? If this information was so critical that we needed to have it, why isn't it given to all of us, or at very least a lot more of us? The whole thing just doesn't work for me. I keep hearing the phrase "Beware of false prophets" reverberating through my head.

I truly believe that if you make any statement about something in the future that will happen...if you wait long enough you can find an event to apply it to. If you read any ancient prediction you can find any current event it fits. We have some sort of strange gene that makes us incredibly fatalistic. Since the dawn of time we have been convinced the end is near. I don't think it is. I know a lot of things are happening that fit with the end of days predictions in Revelations, but that can be said of any time. If you look back at history, we live in that state. We are always at war, there are always famines and pestilence and drought and inhumanities of every unspeakable nature. But I am not quite ready to pick up my sandwich board proclaiming the end is near just yet.

To be honest with you I don't think the times we live in right now are so dire. I think we are doing pretty good. I still believe there are more good people than bad. I just think the perception that there are more bad than good is because we see the handful of bad ones in the media all the time. I think that the Internet has gone a long way to misinterpreting people's natures and intents when they speak because we don't hear voice inflection. But I think we still live in a degree of innocence. I wouldn't want to rely on the kindness of strangers in New York City or LA, but I think they are still out there.

We have come a long way, and we will still go a long way. Halloween is a testament to that fact, we still let our children go trick or treating to complete strangers houses. Houses that open the doors to complete strangers. If we didn't have a little faith and a little trust in each other we wouldn't do that! In the mean time have a fun filled holiday and don't eat too much candy.
Posted by Kelly at 3:26 AM