Looking For A Hair In An Artstack 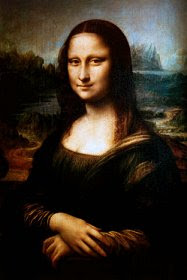 I read this afternoon that someone was trying to figure out what happened to the Mona Lisa's eyebrows and eyelashes. Apparently they aren't sure if she ever had any or not, and they are trying to find out. I suspect she never had any, it was probably the fashion of the day and gave the appearance of an even higher forhead. I don't really see the problem, Whoopi Goldberg doesn't have any eyebrows and she seems just fine. They also seemed surprised to discover that the sky was a brighter blue and her skin was more of a pink when he originally painted it. Yeah shocker, cause 500 years of oxidation wouldn't change a thing.

I have always been utterly fascinated with Leo. Long since before Dan Brown got ahold of him. I guess I can relate to him on some level because he is an artist with a scientific mind. What irks me a bit is that now all anyone seems to focus on, other than the eyebrow guy, is the painting of the last supper thanks to the Da Vinci Code. I don't know why people put so much stock into it as proof of anything Jesus did. It's not as if Leo was sittin there painting it while they were eating. About 1400 years or so passed in between the main course and Leo's art du jour, so he really had no more information than we have now.

There has been a lot of discussion about art in my realm lately. I am sure Jung would be thrilled to know synchronicity is still alive and well, but I digress. The question discussed today was how we in the bear community could be taken more seriously as artists. I used to joke and say if it costs over $100 it's art. But in truth, I think the first step is to take yourself seriously as an artist. In the beginning I thought of myself as a toy maker, much like Drosselmeyer from the Nutcracker. While I like that fanciful notion, the truth is as I developed my style I also became a true artist. All my works involve unique, original pattern design, shaping and sculpting to turn a two dimentional piece of mohair into a three dimentional work. Painting to accentuate it, and embellishment in a myriad of varieties. I make one of a kind pieces almost exclusively. So, a quarter of a centure late, what in there makes me any less of a bonafide artist than a painter or sculpter?

All too often I think we get hung up on labels, and details like looking for Mona's missing eyebrows. We need to simply sit back and enjoy the things that the creative side of people's nature inspires them to bring to life without definition. Art is subjective, it always has been. The mystique of art is it's undefinable nature. When you think about it Drosselmeyer was an artist too, and Mona won't be any less of a work of art whether her eyebrows have faded over the years or if she never had any at all.
Posted by Kelly at 2:06 AM