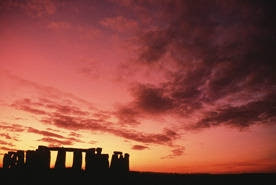 Lets suppose for a moment that it's 4500 years in the future. Lets also suppose that all written records have been obliterated. Archaeologists stumble upon Mt. Rushmore. What would they think? Would they think that the four presidents were gods we worshipped? Would they think it was a place of rituals or burials of important people. Perhaps they would think the presidents noses pointed at water sources or were a way to keep time.

I love ancient history, but I always find it fascinating that archaeologists go straight to one of the mentioned formulas above. I was just reading an article on Stone Henge. As usual the theories for it's use were a giant calendar, a place of worship, a burial ground or a place for ritual sacrifice. While I am sure that's very possible, I have to wonder why no one considers that maybe it was just art...or a market place. Maybe it was an entertainment center with plays or parties. Something deep in the recesses of my Celtic soul tells me they haven't found the right answer yet.

While I realize that religion played a much larger part in ancient cultures than it does today, human nature doesn't change that much. We have always had a sense of humor, something that is rarely depicted in pop culture. But I am pretty sure neolithic people enjoyed a joke as much then as we do now. We have always loved, art, entertainment and gathering together for a merry making.

There is the argument that there are a lot of burial sites around Stone Henge...ok but think about current culture. We bury people in organized cemeteries, but some people choose to do some pretty outlandish things with their remains. We like having a testament to our lives and we choose to express those as uniquely as we can.

I don't need to know what Stone Henge was used for, I can simply revel in the fact that our ancestors went to great lengths to build it and that in itself is a testament to the human spirit!
Posted by Kelly at 4:48 PM