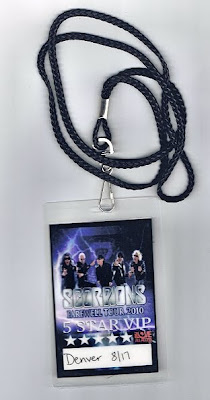 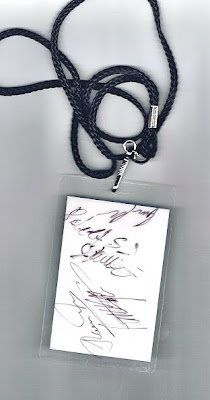 First of all I would like to apologize for missing the Second Star To The Right blog party put on by ...Fawndear...  I have never not done a party I have signed up to do and it was disappointing.  But my little mishap with my shoulder prevented me from taking pictures.  Be sure and visit all the other posts from the lovely bloggers that did participate though.
The concert was amazing.  If you can go VIP, do it.  We went to a pre-show party.  The band was very friendly and just lovely.  We got all sorts of goodies and we had front row seats.  I even got flirted with rather hard to R's dismay.
I have to say though, I was apprehensive.  They have been putting on concerts for 45 years, so they aren't young any more.  I was nervous that they might not sound as good as they did 30 years ago, or maybe they were simply burned out since this is their farewell tour.
The opening act was Cinderella...another band that was popular in the 80's if you aren't familiar.  I wasn't that enthused to see them to be honest.  I used to like them until I had an up close and personal episode about 23 years ago with Tom Keifer and it left me a little sour on them.  Let's just leave it at that.
When they came out to preform, they sounded rather poor...and Tom's attitude didn't seem to have improved any.
But when the Scorpions came out to play it was a world of difference.  If they are in fact tired of preforming, you would never know it.  They sounded incredible, they looked like they were loving every minute of what they were doing, and they really drew the audience in.  Their show was truly amazing, and I didn't want it to end.  I really did feel young again for one night.
The next morning however...I was back to being old again.  My ears were ringing so hard I could barely sleep.  I felt like I had a hangover even though I had only had one g;lass of wine.
R took me shopping in Denver and spoiled me a bit.  But despite the thrill of shopping, it took me two and a half days to completely recover my hearing.
After we got home on Thursday, my friend who had been house sitting and I went to see "Eat Pray Love,"  I wasn't sure I liked it as much as I thought I would.  I am not sure why.  She thought it was wonderful  Something about it left me feeling a bit bereft despite the happy ending.   I can't quite put my finger on it.
Later that night I pulled my shoulder muscle and haven't done much since then until tonight.  I finally forced myself to cut out two new pieces.  So...those should be along presently.
Other than that, Verdigris will be heading out to his new home in Pennsylvania shortly.
I hope you all had a lovely weekend!
Hugs, K. <3
Posted by Kelly at 4:20 AM

I'm glad you had a good time!!! It sounds like it was a pretty awesome trip!!

I'm sorry about your shoulder though :(

I keep hearing about Eat. Love. Pray. (or is it Eat. Pray. Love.? I forget...)but I have no idea what the overall story is... I suppose I should look into the synopsis... but it just keeps reminding me of a bookmark for The Forest of Hands and Teeth (a zombie novel) that reads Eat. Prey. Love.

Glad you had a good time. I was anxiously awaiting your report. The girls said the very same thing about the Scorpions, excellent. The Olde Bagg

Glad the trip was so fun, even with the ringing ears (I get that horrible white noise sound in my ears for a day or two after going clubbing)

So glad you had a good time at the concert, and shopping. Totally understand about your missing the Blog Party. Hope you shoulder heals quickly.

Hope you get over the old feeling quickly because you truly are Young at Heart.