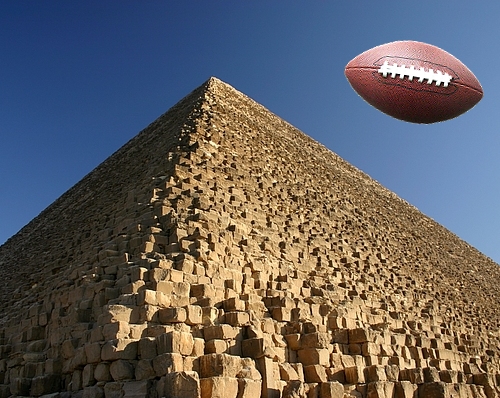 Many people aren't aware that time is not a constant on this planet.  Mass has a direct relationship on gravity, and something with a large mass slows down time the closer you are to it.  For instance if you were standing next to the Great Pyramid time would be going a smidge slower there than it would be ten miles away.
Of course there is an exception to every rule.  For some reason that physics cannot explain when a group of men stand next to a football, which has very little mass,  2 hours slows down to 3 1/2-4 hours.  It's quite a phenomenon really.
One thing that is a constant however, is that if you spend your life with another human being...a day will come when you look at that face you love so much and wonder to yourself exactly when they lost their mind.

When we first met R liked football, but he only watched his team play.  He has always been a Raiders fan.  I am not sure why since he has never lived in California and he doesn't even care for the state.

As the years rolled by he added more and more games to his TV repertoire.  As of last season he started watching talk shows pertaining to the game as well as the games themselves.

Now if you read my blog you know I that I love R and think he is a great guy. He is a logical guy as a rule and not given to superstitions and the like.  But he is a guy...and recently he has fallen into that psychosis that sports enthusiasts can fall into. He has  become one of those guys that cheers and does a little dance when they score as if he made the touchdown himself.   He has also decided I can't wash his Raiders lounge pants and jersey until they lose.

This season for some inexplicable reason he...like so many other men, think this has a direct effect on whether they win or not.  I guess that training, weather conditions and the location of the stadium they play in doesn't factor in as much as one would think.

Nope it's because he is wearing dirty clothes.  Who knew?

As I was doing laundry today I found myself secretly hoping they lose...and soon!  I wonder how much time slows down around an article of clothing when it builds up layers of dirt?
Posted by Kelly at 2:59 PM

ROFL, at times like this I guess I should be glad I'm single!

LOL... at least it's not his undershorts and socks too...