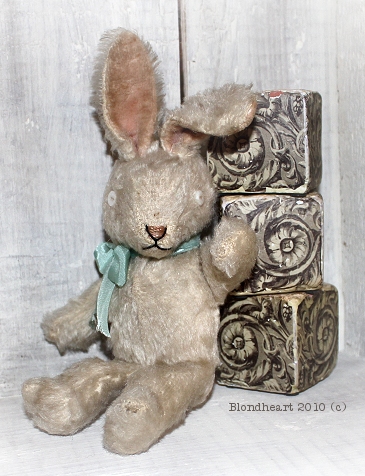 This afternoon I went out shopping for a few things I needed.  I went to look for one of those things in my favorite antique mall.  I did find what I wanted, but as I was cruising past a tall cabinet that held jewelry, I noticed a bit of aged white fluff on the top shelf.
The tag read "Possible Steiff?"  He isn't of course.  He is just a little Japanese knockoff piece from the late 50's to early 60's.  In an uncharacteristic fit of haggling, I asked if he would call and ask if they would take a lower price.  She was quite agreeable and took 15% off.
I am not entirely sure I got a bargain, but he had such charm I bought him anyway.  I was going to replace his lost eyes, but when I got him home I realized two very funny things.  One is that whoever tried to mend him glued the buttons on instead of sewing them.  I thought that was odd until I realized the second funny thing...he doesn't have any stuffing in his head, it's just some type of ball form that's very hard.
Maybe it's for the best, his little white shell button eyes add to the personality that I found endearing anyway.  He isn't jointed, but his head permanently looks to one side.  Probably from being carried tightly against the body of the child who loved him.
I gave him a new ribbon since he didn't have one...and I would swear he is smiling a tiny bit more now than when he was in the jewelry case!
I have been working very hard and haven't had time to post much, but I thought since I can't show you all my fun new holiday pieces just yet, I would show you my little treasure I found instead.  You will get to see the three new pieces at the show on the 20th.
Not to worry though, there will be some new stuff you can see soon!  Bastian and Pip flew off to their new homes yesterday.  Pip is going all the way to Glasgow...and I wanted to hand deliver him! Bastian is off to sunny California.  I miss him already!
Posted by Kelly at 4:55 AM

He's quite the adorable little find. I had an old bear once with the same kind of head (Ok, I still have the old bear... Don't know why I'm talking about him like he's not around!)

And I can't wait to see your holiday selection!!

LOVE the bunny! You made a very wise purchase--she's just too sweet.
Heaps of Hugs,
Cheryl

Aww, what a lovely find, and an interesting story about his construction.

I wish you could have got to hand deliver Pip too, maybe one day you can drop by and visit him :o)

He really is lovely and got bags of character.