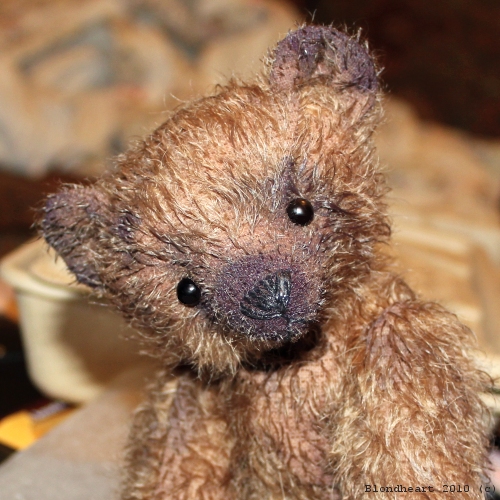 One afternoon when R and I had only been married a short time he came home to find me with a finished bear and a couple tears running down my cheeks.  I had been working very hard getting ready for a show.  He asked what was wrong and I told him I had made a bear that I really liked and I wanted to keep it.
He was puzzled as to why I was crying over this.  What he didn't understand was that I was feeling extremely conflicted about that.  I explained to him that my Mom always told me to sell them.  In fact she convinced me so well that I felt guilt if I wanted to keep one.  He hugged me and told me that I made it and I could do what I wanted to with it, and if I wanted to keep it that was perfectly ok.  I did keep it.
I never really got over feeling that way though.  Usually when I want to keep one I end up feeling too guilty about it and sell it.  As a result I have very, very few of my own bears.  (I have lots from other artists!)
When I made that very first bear all those years ago I made it with the intention of keeping it.  I made the second one as a present for a friend, and I really had nothing in particular in mind when I made the third one other than that I wanted to try to make my own pattern from scratch.  It was the third one that sold and through a series of events that started me in the bear business.  In all the years that have followed I have never sat down to make another bear that was just meant for me.
I have been working very hard lately getting new pieces done...some of which you have seen and others that are being held back for the upcoming online holiday show. I have been alternating so you get to see one and then I hold one, etc.  In there I made the new bear pattern that you saw with Bastian and another one you haven't seen yet.  I really love that pattern. I wish you could hold things through the computer so you know how truly delightful they feel in your hand.
Anyway...last night I took some time out from making bears for my collectors, and sat down with the intention of making a bear just for myself.  He is only halfway through the distressing process and he isn't detailed yet...but I snapped a quick pic.  It remains to be seen if I can bring myself to keep him or not.  Either way I like him, he has a really sweet face!
I will show him to you later when he is finished.  In the mean time I am going to go fall into bed!
Have a lovely day, K. <3
Posted by Kelly at 6:11 AM

He's adorable...you should keep him!!
:D

I agree with you. He does have a very sweet face. And if you want to keep him, I wouldn't blame you one bit. You should and enjoy him and his very fine company. Good luck with the show!

He has a beautiful face! You should keep him =) One day i shall make myself a bear too! =)

I know what you mean, if you keep them its less money for the bills. It is a business but sometimes, heart over head....I might make a bear just for me when the last posting days have gone in december. As most go abroad there will be time before Christmas. Go on, keep him!

Aww, he's looking fab already, definitely think you should ease off on the guilt feeling just this once :o)

I absolutely love his little face!!!

ooooh how super supercute! love him very much! and he looks a little bit like my first "shabby" bear i made. best wishes and big bear hugs! di
;0)

That's a lovely story, Kelly! I can see why you would want to keep this little sweetie...he just exudes personality. I think it's unanimous..he's meant to be yours!