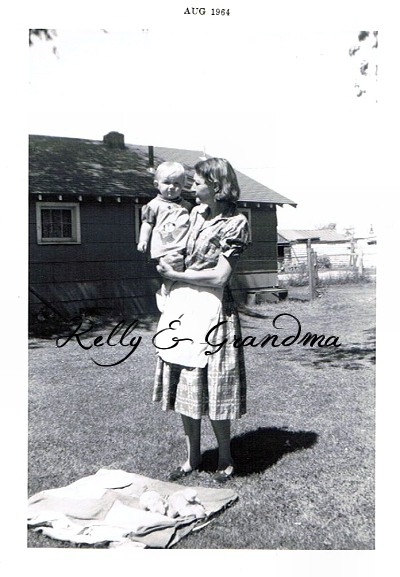 When I was born my hair was red, so I am told.  Then it all felt out three days later, and came in blond, when I was very young it was almost white.  As I got older it settled into a nice baby blond where it stayed until I had an unfortunate incident in high school   I was in the production of The King & I and I was the only one playing a Siamese character that didn't have dark hair.  Now I didn't know much about hair coloring so I bought something called Fanciful Rinse in black.  I thought that meant it would rinse out.  It didn't.  It also didn't adhere quite properly so I had blond spots.  My head looked like a banana gone bad.  It was one horrible week.
After the production ended, I went to "Cecil" and had him strip the color out of my hair.  The following week we started swim class.  My hair was back to blond but with the chlorine and being so porous from the stripping it turned a strange shade of pale green.  My junior year wasn't that good.
Since then I have been blond all my life with the exception of dying it red on three occasions because I wanted to do something different.  I actually look fairly good as a redhead because everyone else in my family had reddish hair.

That pic was taken in the 80's...hence the giant hoop earrings and big hair.
As we age our hair darkens a bit.  Normally in the summer I am outside doing stuff and the sun gives me natural highlights and brings me back to light blond.  Last summer was so hot that I couldn't spend much time outside and when I was out there it was to garden.  I wore a hat most of the time because I burn so easily with my fair Celtic skin.  Even though I am still blond I was looking in the mirror the other day and noticed it's a very dreary shade of dirty blond right now.
Since it's so long that it grazes the top of my posterior now, people often think it would be hard to take care of.  That's not true at all.  In fact it's pretty low maintenance.  I wash and condition it every other day.  I do a deep conditioner about every 10 days.  I never blow dry it unless I absolutely have to be somewhere.   R trims my ends, and he has gotten quite good at it.  I trim my bangs.  The last time I went to our stylist he said my hair was in better condition than most 20 somethings he sees.
Styling is easy too.  It's all one length except for my Barbie-esque fringe.  I run a curling iron through it and let the rest hang naturally.  Sometimes I use a cute barrette or headband and when I am working I braid it.  I used to put it up, but my neck can't take the weight of it all piled on top of my head because I have so so much of it.
I decided when I saw how dreary it really looked to call our stylist.  R goes to him regularly, but I haven't been to see him for anything in years.  I am going to get some highlights this afternoon to brighten it up.
I am feeling kind of nervous about it.  He says it's going to take several hours.  I am sure it will be ok, but when you have been growing your hair as long as I have, any chemical process is a little scary.
Wish me luck.  I will let you know how it turns out!
Hugs, K. <3
Posted by Kelly at 8:44 AM

I bet it will be lovely. My daughter has blonde hair and its highlights really well.

Good luck! I love how my hair feels after going to the stylist... I swear they use something magical that they keep secret from us. Even when I deep condition my hair never looks or feels as good as when someone else does it, lol!

Good luck Kelly and if turns out post a photo for us! :) We'd love to see it! I too have hair as long as yours and I actually find it simpler to maintain than a shorter curlier style as I can just braid it and I'm done! I also trim my own bangs but sometimes I think that it would be nice to have someone else do better for me on that. I just get nervous going to hairdressers as they often tell me they fantasize about cutting off someone's long hair as they are handling mine and well.. that makes me a little jumpy that they might get carried away when trimming off the length, LOL!

Hope it all went well! I visited my first hairdresser when I was 20 (it was long and my mum trimmed it before). I still only visit at most twice a year for a trim, seriously, when you look like you've been dragged through a hedge backwards 100% of the time, it makes no odds if I 'style' it or someone else, and I'm free :oD