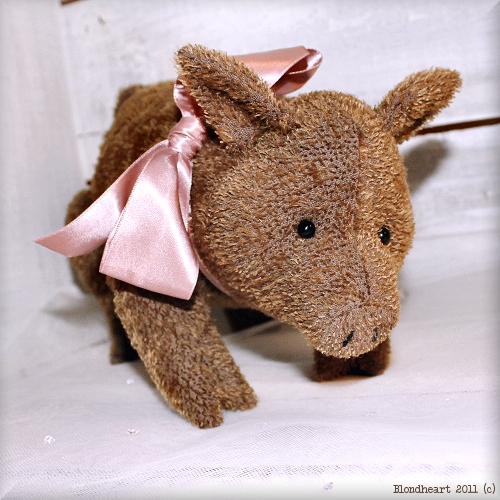 Labels: Copying, outside influences, same ideas at the same time, what to do if someone copies your art

First off, I love your little piggy... he's really cute :)

I think the only thing that would make me pursue someone copying me would be if they got some multi-million dollar deal out of it.

If it became a really hugely well known character, I'd want some credit for the fact that I designed it.

On this same note... I've always been confused where patterns are concerned as well... because I've read that, even though artist often put that you can't resell what you make from their pattern... legally, that wouldn't hold up... that once you sell the pattern, you have sold the pattern itself (and it is the pattern that is copyrighted)... and while people can't copy the pattern and sell it, they can do whatever they like with what they make from that pattern.

I'm not sure if that's true or not... but there was a huge flair up a while back where a woman was reselling patterns she'd bought. She hadn't copied them (or even used them, in most cases) but the pattern's creator went ballistic over her reselling them, stating that it says she isn't allowed to do that (and for the record, it didn't say that on the pattern itself, only on the pattern artist's website).

Because of that, the woman doing the selling went on a huge research spree and linked to quite a few copyright law sites that, to me at least, seem to say what I said above about end product from a pattern... it also said that she had the right to resell the pattern, just not copies of it.

Ever since reading that I've been even more confused on pattern copyright law and exactly how legal all of those "You can't sell anything you make from this pattern" statements are.

Personally, I think if you're selling a pattern, then you need to let go of trying to control what is done with the end product. You're already making your money off the sale of the pattern... and so long as people aren't copying the pattern and sharing it... you're getting what is owed to you.

Yes, someone might take your $15 pattern and make $200 bears from it... but they're also the ones buying the supplies and putting in the time to make it.

Granted, I still respect the "don't resell" this request... just because I both respect the artists and because I'd rather sell bears I made than ones I made using someone else's pattern... it's much more satisfying to see something sell that you made yourself (or... that you at least think you made yourself, lol)

I absolutely will look more into this pattern of popular thought stuff though... because how many times have I seen the same thing pop up in several places all at the same time... or how many times have I thought "Oh, this would be a good idea" only to see it pop up on other folks pages a few days later... it would be very interesting to look into studies on that.

Heather, I do know that redistribution is illegal unless it specifically says you can. As for making someone elses pattern and profiting from that...I have no idea. I buy patterns all the time, and I have never made a single one of them.

However I do look at patterns to see how pieces for things I am unfamiliar with go together. Then I draw my own once I have an image of how it works in my head.

I freely admit I quite often have to look at the technical aspect before I can draw my own because that's hard for me. Once I do it, then I can go on my own from there to design a similar pattern. Is that copying? I dunno, maybe sort of, but sort of not? We all had to see a pattern or design from someone else initially to know what to do before we made our own for nearly anything the first time.

And very very few of us are responsible for an entire genre of art. Most of us chose what we make because we liked something that already existed. In our case it's teddy bears.

Also it's amazing how very different pattern pieces can often produce the same look. Another artist and I made bears that were very similar in shape and style. But I saw her pattern once and it was nothing like mine. My pattern pieces have very gradual curves and hers had sharp angles...but yet the end result was still close.

People also believe if they take an existing pattern and edit it a bit that's an original design. Depending on who you talk to they may or may not agree.

I think the best thing you can do is always try to design your own patterns the best you can for what you sell. It's always going to be similar to something else somewhere because there are billions of artists throughout history.

Even when you think you have come up with an original idea you can't be sure because you can't see what lurks in the murky waters of your subconscious that you might have picked up somewhere along the way.

There really are no new ideas. All you can do is be true to yourself the best you can, and hope that someone doesn't decide to create some drama for you out of something innocent.

Thanks for sharing this post Kelly, I am a good boy - I finish reading everything =)

I gain a lot by reading this, very helpful. Thank you =)

Or, for that matter, how the same pattern can produce very different looks!

No, I agree with you... and I make my own patterns for anything I intend to sell... but I thought it was interesting how murky the waters seem to be around patterns especially when it comes to copyright.

I love reading your blog Kelly and a very well written and truthful post this is.

As a new kid on the block in the bearmaking world, I know I've definitely held off trying some things for a while if I've seen a number of things popping up along the same lines, mainly because I tend to think that as the new kid someone is bound to think I've copied them rather than thinking something up. Me and my paranoia are now off to bed ;o)

I am back again, I forget to tell you - I LOVE THIS LITTLE PIGLET! Cute =)

Hamlet is cute !! Thanks for sharing,enjoy reading it !!!

Your miniatures are so great I have become one of your followers. I also make miniatures. Please visit my blog. http://weelittlewest.blogspot.com/

Hi! I love the pig and think he's grand. I guess I haven't been around enough because he's the first four legged one I've seen that stands on them like that! ...just adorable.

I also thought your post in general was really thoughtful and logical in a lovely and friendly way. And while not aware of the circumstances that inspired it, I know it must take time & effort (when you might rather be creating a bear!)to write so well and I admire you for making the efforts to do so, so often.

You are a joy to read because you are fair-minded and you think things through from both sides before writing about them. Thanks for the honesty of your thoughts and for the interesting diversity of things that you write about.