The Meaning Of Five Posts? 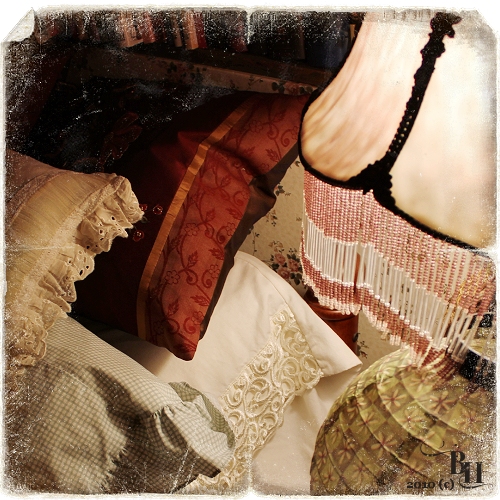 I haven't been sleeping very well again.  It's not insomnia this time, but instead I am having a recurring dream...sort of.  More like a recurring theme really.  I can't figure out what it means.
I used to have recurring dreams as a kid.  Three different ones, and every once in a blue moon I will still have one of those three dreams.  One of those is I am walking across a kitchen floor we used to have made of tile, and as I step the tiles fall away to either side showing ocean underneath.  The second was again with water...I would dream of a white gorilla swimming in a lake like a diver.  The last was the most puzzling of all.  It was like one of those op art posters from decades ago that had the circle design and if you looked at it long enough it looked like a propeller in the center....well the dream was two of those with a line across.  The line would start to vibrate and hum.  The hum would get loud of enough to wake me up.  I have no idea what any of them represented.
Later in life if I would have recurring dreams I started to take notice of them.  The first one that impacted me was in high school.  I dreamt of a guy sitting under a tree reading a book for five nights in a row.  I happened to be in the book store that weekend and low and behold there was the exact guy.  I didn't speak to him, but when I noticed him he was staring at me with recognition as well.  In retrospect I wish I had talked to him.  It would have been interesting to know for sure if he had been dreaming of me too.  I was too shy at that point in life, and I left...never to see him again.  So why did I dream of a complete stranger?
Jump forward quite a few years and I began dreaming of a tornado coming at me every night for a week leading up to a show I was going to.  This time I was older and wiser and finally consulted a dream dictionary.  (Who figures this stuff out?)  Anyway...the book said that dreaming of a tornado meant that you were feeling turmoil about work.  That seemed reasonable so I didn't give it much more thought until I was driving home from the show.  Half way through Kansas, a tornado literally set down on my car.  Since then I have paid more attention to my recurring dreams.  Apparently my subconscious has more knowledge than my conscious.  A few years later, three nights in a row before a show I had the tornado dreams again.  I was a nervous wreck.  This time the tornado set down in a field across the road from me in New Mexico.  Needless to say tornado dreams make me extremely uneasy now!
The past three nights I have had dreams that while not the same, had a similar action.  I keep dreaming I am banging away on five posts with the flat of my hands...almost like bongo drums.  But I know my intent is not to make music.  There is more to each dream, but when I wake up all I remember is the part about the posts, and I have an uneasy feeling.  In the first dream I was in some sort of rocky outdoor place and the five posts were made of wood, like short logs.  They were painted red and I was banging away on them for some reason.  The next night I was in someplace that was black and glittery...like a nightclub after it had closed.  The posts were silver metal and very ornate.  The tops were domed this time and looked like giant pearls.  Last night I am not sure what sort of place I was in, but the posts were carved and black...like onyx tikis or something.  Again I was banging away on them, and in the same order each time.  It's as if it's a code or I am trying to open something.  I just don't know.
I am utterly mystified as to what my psyche is trying to tell me, or why I feel uneasy about it.  Whatever it is, at least this time I am fairly certain it doesn't involve bad weather!
Posted by Kelly at 5:46 AM

Hmm, I haven't a clue, maybe a sign to take up learning morse code?

I call these tequila dreams....lol. Not to make light of this really, but my goodness how odd. I think I would be afraid to sleep. I am impressed that you remember so much of the dreams, I never do, maybe bits and pieces...maybe I am better off....much luck :)