Tips For A Clever Set Up 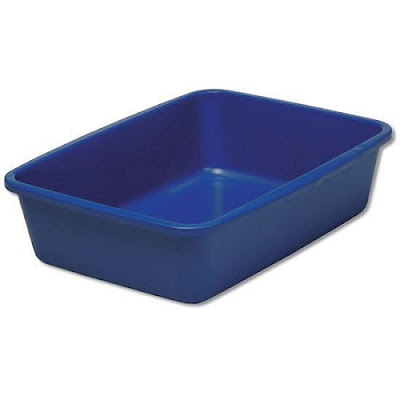 Since cats have been the topic this week, I thought I would share a little of R's cleverness with you guys.
A couple years ago R and I were going to go on vacation and we decided to have a friend come and "babysit" my pets.  When she got to my house she said she was really surprised that she couldn't smell my cats.  I asked her what she meant and she said well you know...the litter pan.
I asked her if she could figure out where it was.  After looking all over the house she was mystified.  Finally she gave up and decided that they must be trained to use the toilet.
As nice as that would be, no...they aren't quite that smart.  When we bought this house it was nice and large but there really was no convenient, out of the way place to put the pan.  So R, being the construction guy he is got right to work figuring out what to do.  Now over the years he has been offered money to set this up for other people...and while he hasn't accepted because he is too busy, he is happy to share the details for anyone who wants to do it themselves.
In our foyer under the table against the wall, if you were to bend down and look you would see a round hole that resembles a porthole.  It has a nice frame around it and is just about the size of a porthole too.  It leads to a piece of carpeted sonotube that goes through the closet and out into the garage.  Inside the closet he finished it with a wooden box and drywall to cover it and it makes a nice shelf for winter boots.  It looks as if it's always been part of the closet.
The sonotube leads to a large wooden box in the garage.  It has a hinged lid on top like an old wood bin.  Inside are two large litter pans.  He also put an exhaust fan leading outside so any smell there might be is sucked right out the back of the garage.
I have a very sensitive sense of smell and while I love my cats, I don't like bad odors.  It's a great system and if anyone wants more details I would be happy to supply them so you can do it for yourself!
Have a great weekend!  Hugs, K. <3
Posted by Kelly at 3:25 AM

Wow, what a clever man. We need pictures of it in the house and out in the garage, plus the exaust fan. He needs to go on the inventors.
Hugs

That's incredible Kelly! I know someone who could do with that set up ;o) When I visit, it's not too pleasant using the bathroom as that's where the cats go too! UGH! I don't have a cat and I find it rather unpleasant! (mind you it's the visiting cats not the resident so hopefully in time I'll have the guest bathroom to myself again)

ooh.....and tell R he's awfully clever but you've probablt already told him that! Sorry about the delete above, I thought IE had stuffed up and clicked again.....it's been a pain all day!

Now that is a super-clever idea. I wonder if it would work for my pipe-smoking husband .....? He's my life, but I could live without the pipe pong and tabacco dust.He doesn't seem able to contain the mess in even the largest ash tray and I can't train him to empty the trays anyway.
The two cats, on the other hand, would DIE before they would do anything smelly in the house and the younger one has figured out what door handles are for.
I bet your cats are thrilled at having their own, very private bathroom facilities!

How fab, I'd never even imagine doing something like that!

My husband thought this was an excellent idea - he asks: so where's the picture? I'd love to know more of the details!