I got home from the Kansas City Teddy Bear Jubilee yesterday and I wanted to make a post, but I was SOOO tired!  I find that driving that hard on so little sleep really took it out of me.  I guess I am not as young as I used to be despite the fact that everyone I hadn't seen in years said I look exactly the same except that my hair is even longer.
Now on to the show...the banquet the night before was lots of fun, but I was exhausted and didn't stay for the auction.  The next morning I got up and started getting ready.  I was dressed and thought I would run my suitcase and laptop out to the car before finishing up with my makeup.  That way I could check out and only have to fuss with my duffel bag.  At the last second I decided to run the curling iron through my bangs.
When I got back to the room the power was out.  As it turned out, it was out for the entire area, not just our hotel.  Thank goodness I decided to do my bangs before I went out!
The show had a nice crowd when it opened, better than the previous year from what people said.  Sadly we were in the dark for the first three hours.  I had a flashlight in my purse, but it's hard to buy bears when you can't really see them.
The power finally returned and we still had a pretty good show.  I took some pics, and I have to apologize in advance.  I had bought a little camera for traveling and this was the first time I had used it, so some of the pics aren't that good.  But it was nice to see some old friends and make some new friends! 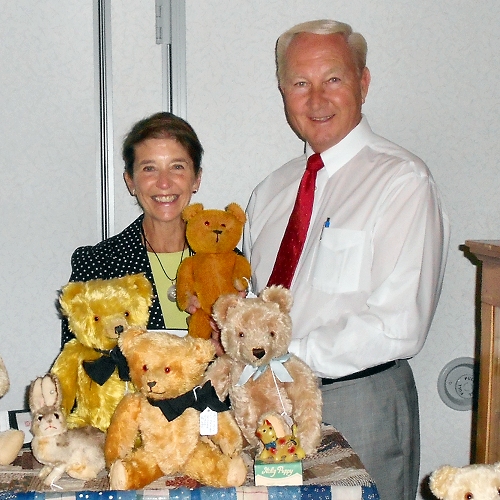 Ken Yenke and his lovely wife did a program on Saturday.  Unfortunately I didn't arrive in time to attend, but from what everyone said it was quite good.  He is holding a 1920's Petz bear that managed to make his way home with me! 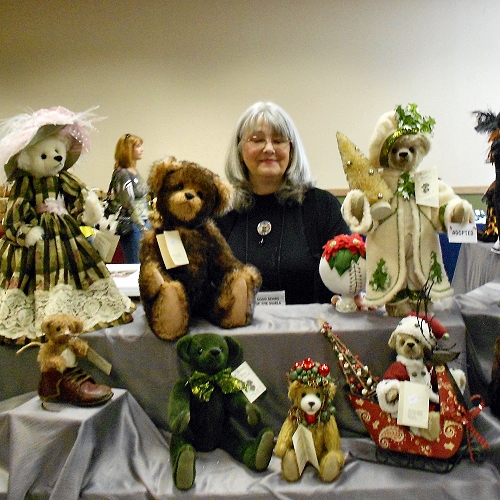 I was right next to Martha Burch who is always so much fun.  And no she wasn't sleeping...I just managed to snap the pic when she blinked! 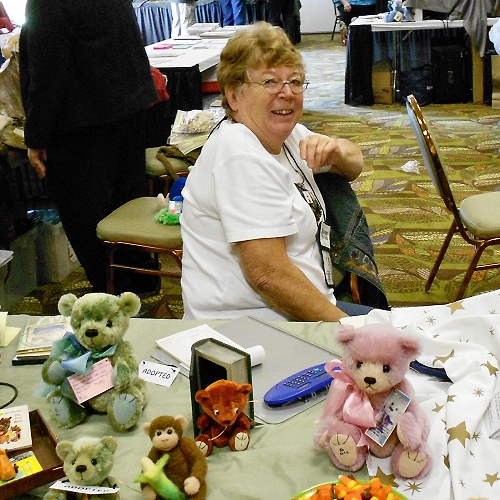 On the other side of me was Bettina Groh from Glass Dragon Bears.  Her bears are every bit as sweet as she is! 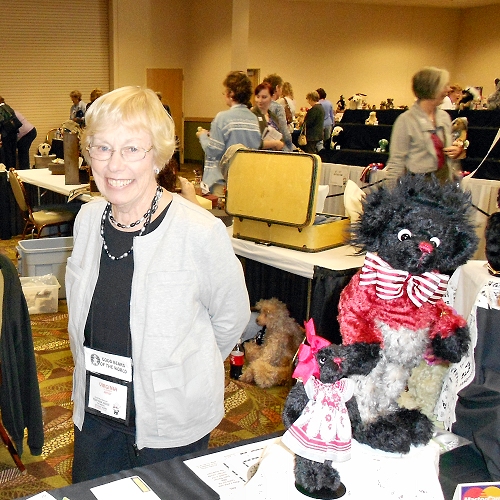 It was also nice to see Virginia Jasmer.  She is just lovely and I have missed seeing her. 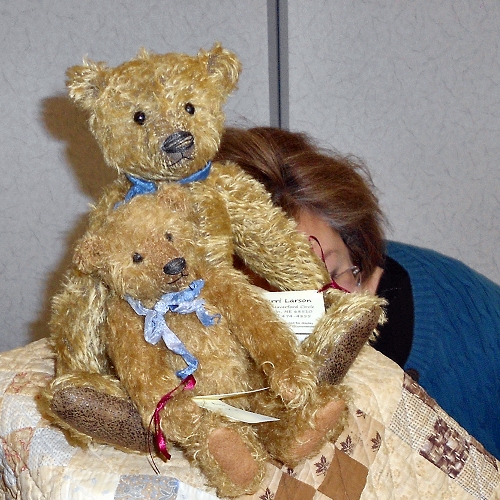 Terri Larson was really adverse to having her pic taken.  I tried three times and this was the best I could get!  She is so silly...and was always one of my very favorite people.  So it was fun to see her again. 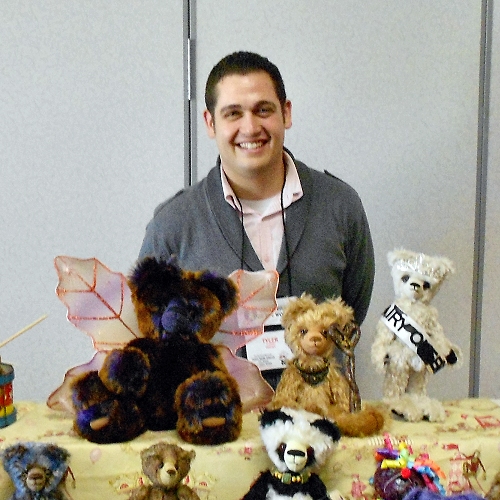 I met Tyler Crain-Davis from Teds 'n Such for the first time.  He is just a doll and I liked him immediately! 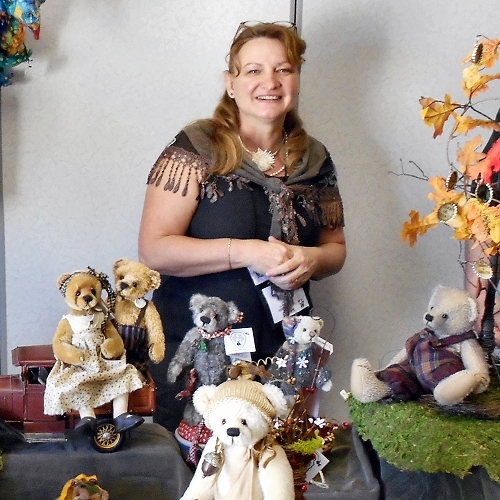 Isabella Hoffman of Bearly Collectibles was also new to me, but I found myself drooling over several pieces she had.  If only I could have brought home everything I wanted! 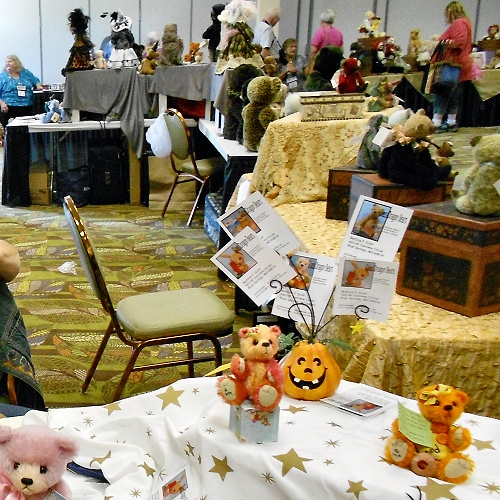 Somehow I never managed to take a pic of my own table, but you can see it from the side behind Bettina's table.
Quite a few pieces did get adopted, but I do have some new pieces that are still waiting for that special person.  (Yes Gideon the Gargoyle is still waiting too...which surprises me considering how many ardent admirers he had.)  So I will have those photographed and posted to the  blog and site hopefully in the next day or two.
Also I came home with a trunk FULL of mohair, so I should have a surprise coming for the rest of you very soon...as soon as I can get it done.  I will be working on that along with pics today since R is out of town.
Until then have a lovely day!  Hugs, K.  <3
Posted by Kelly at 4:27 AM

Stories like the power being off or a giant snowstorm or torrential rains at a show certainly make them memorable. I enjoyed seeing the photos and am glad that you had a good time. Hope you get rested and recovered. Looking forward to seeing what you have in your bag of tricks!

Sounds as though you had a great time even if the power was out.
Hugs

Such a nice time, Yay!!! for Kelly!!
I sure was looking forward to pics of you and your table though. LOL
Loved seeing the pics of the show looks like a great time. Someday I hope to make it to a show!

thank you so much for sharing some pictures of Kansas City Teddy Bear Jubilee! It is so exciting to see photos of a show on another continent. I always wanted to visit a show in the US, watching photos is a nice approach. For the next time, would you please take more photos of your own table, too?

It was so great meeting you in person, Kelly! Thank you for taking a moment to chat with my daughter and me. Loved seeing the little gargoyle bear "in the fur"--I'm so surprised he wasn't adopted! He's really amazing, as are all of your creations. Glad you made it back home safely--hope you get some R&R!