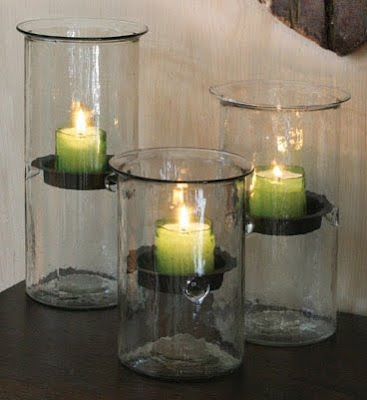 Last week I got a wonderful catalog in the mail that I had never gotten before. It had all sorts of organic looking glassware, cast iron statuary, and a whole host of other things for around the house that no one needs, but some of us would like to have because we are peculiar that way.

In it there were some hurricane lamps. Not the old fashioned kind with the wick and all that, but more along the lines of the Pottery Barn variety that are like giant blown glass beakers with a metal tray for a candle suspended in them. I have seen these before on many occasions, but for whatever reason I was suddenly gripped with the mad urge to have one. A big one!

The ones in the catalog were rather expensive and I figured that World Market would have some. So the next morning I hopped out of bed with a burning desire to head over there.

Now I must interject that usually when I want something even if I have seen it a thousand times before, I can't find it when I want it. (I have a whole other saga about trying to find a simple white t-shirt, but I won't go into it.) Low and behold World Market did in fact have the very thing I was looking for.

They were still rather expensive, but not quite as bad as the catalog. I stood staring at them trying to decide if I wanted to spend that much on a large candle holder. Finally I decided that I really did want one.

As I was setting it in the cart I barely tapped the slightly fluted rim of the larger one and it broke a piece out of it. I went to pick it up to give it to the sales girl and when I picked it up, it shattered. I was MORTIFIED.

I gave it to the girl rather sheepishly and offered to pay for it since I broke it. She said no no, it was fine, accidents happen and then made sure I was alright.

I decided not to buy one. I figured if they break that easily, despite being called a hurricane lamp...it would never survive Hurricane Kel! In fact I suspected it might not even make it home.

I still managed to find some other lovely treasures including some bright yellow floral french country place mats. I great basket and some carrots for the chocolate bunnies. A red Chinese teapot and cups, a yellow scarf (it was a yellow day apparently) a couple pair of earrings and some various and assorted goodies to eat.

Lastly I decided to go look at the jars. I love the jars they have there. They are like general store jars and I have several very large ones already that are filled with an odd glass and stoneware pumpkin collection, seashells and one with pine cones.

I found a bit smaller one that was roughly the size of the hurricane lamp I was going buy. It was the only one that size and it didn't have a lid. I put it in the cart anyway, and went to check out. I asked her politely if they had any with lids. She checked and they didn't. I suppose she suspected what I wanted with it though and offered me either a rain check or 40% off of that one. I took that one!

Two inches of sand in the bottom and a green candle later I had a very nice hurricane lamp that was three times as sturdy, and cost me 1/5 of what the one that I broke would have cost me. Sure it doesn't have the metal tray suspended half way in it, but sand works nicely too and gives off a homey glow.

While I felt bad about breaking it, it was a happy accident and I think sometimes I should remember to be more creative with every day things instead of just buying something pre-made and too expensive when I don't have to.
Posted by Kelly at 1:02 AM

I'm just envious of anyone who can have candles in their house!

My one cat is a firebug... ever since he singed his eyebrows off as a kitten... he's been looking to get some sort of revenge XD

When I was a kid we had a gas heater with a concrete grate, and out cat would always sit too close to it and burn all the hair off of the back of his tail. He did it so many times that it quit growing back.

Hi Kelly! I bought some hurricane's once and I managed to break both of them at home... then dumb me found replacements on ebay and bought them...I managed to break one of them too!!! Now I have one left and I refuse to even touch it!!!...LOL! great post! have a nice week! hugs, Jennifer