If It Wasn't Broke, Why Did I Fix It? 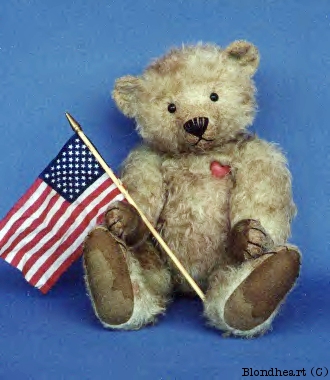 Honestly? I like where you're at now. The bear you posted a picture of today is lovely, and adorable, and so cute... but he's not the kind of bear that made me fall in love with your style.
I'm forgetting their names, but you had made two larger bears, one brown with lush fur and a beautiful flower headband... and another a pale blue (also with flower headband) that just made me fall in love with your style.
There was a distinctiveness to them that really said "Kelly made this" to me. I felt like they were something I hadn't seen before, and that they were beautiful.
Then you were kind enough to make me a bear that was smaller than what you usually make... and he's a spunky little guy with such interesting squishyness... I love your tiny style.
I don't know, I feel like, while this boy you've posted today is obviously a beautiful bear... he's lacking what, for me at least, is the "stuffed life" feel.

I'm sure you got loads of love from people who had never seen those bears 'back in the day' as that there internet hadn't been invented, and they may not have been able to see you a t shows or in shops. On the other hand, if you don't evolve to new things, your customers will likely lose interest (as will you), so while nice to have shown him off again, I'd stick at it with the moving forward and exploring new things :o)

Interesting. I get the same, but can you go back? I recently used an old pattern but it did not look like my old bears because....not sure why but I actually quite liked it all the same. Why not try and and just see what happens.