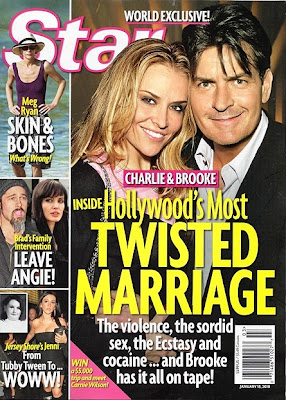 When I was getting ready to go to the airport to get R this afternoon I was watching "The Talk."  Daytime TV isn't my thing, but I don't mind watching that show once in a blue moon.  They were discussing a picture that posted to an English tabloid today talking about Sharon Osbourne having arm wobble.  Sharon is very funny and said you bet I do!  Well of course she does...she is 59 years old, had 3 children and survived cancer.  I think there are a lot of things you could say about her far more interesting and flattering than that she has arm wobble.  Who cares?  Why is this news worthy...or for that matter even tabloid news worthy?  Is it really going to draw ratings to pan the woman's age appropriate arms?  The whole notion that people have to look absolutely perfect all their lives is ridiculous, even if they are famous.  It's so damaging to all of us.

You can't go anywhere or get online without both news and tabloid news hitting you in the face.  I don't really think that many people care about that stuff.  I know I don't.  Sure sometimes we read a headline in the grocery store check out line...but it's forgotten exactly 3 nanoseconds after it's read.

But this got me to thinking.  In my last post I talked about when people take their personal differences and post it publicly online.  Maybe to a degree it's not so much the fault of the individual, but a product of society as a whole that we have started thinking this is an ok thing to do.  Afterall we have Facebook and Twitter for the sole purpose of posting what we are doing at any given moment.  Social networking has become like our own personal news feeds.  In the news they post everything and anything, whether it's true or not...the more scandalous or attention grabbing the better, so somewhere along the line we have started thinking that we should do this as well.

I have fallen victim to it too.  I post this little thing or that on Facebook...if I am going on an outing or having dinner somewhere.  My snakes in the garden issues.  What my latest tally is on my diet...25 pounds by the way!  Sorry I am feeling proud over that and want to shout from the rooftops.  Plus a whole host of other little mundane things.  But like the tabloids I suspect that when people read this stuff they remember it for all of about the same 3 nanoseconds as they would a tabloid headline, and move on.  I don't expect anyone to hang on my every word, but I almost feel obligated to post something to Facebook at least once a day when I don't have a new piece to show off.

I don't suppose there is anything wrong with that, it's fun to keep up with what our friends are doing.  But when it turns malicious or gossipy, is it a way for people to get ratings much like the tabloids try to do?  To be honest I do think that plays a part in it for some, even though they don't consciously realize that's what they are doing.

All I can say I guess is the next time you read about a person, famous or otherwise, who has a few too many pounds here or there, has done or said something stupid they wish they hadn't, or had a fight with someone...instead of reading further, get out of your chair...walk to the powder room and have a good long look in the mirror.  If you have 0% body fat, never done anything stupid you regretted, or had a fight with someone...then by all means go back and read what it says...you've earned it!  But if you aren't in that category and are a mere mortal like the rest of us.  Think for a moment before you continue, how would you feel if someone was reading your dirty laundry!

And that's why I never read those magazines - who cares?!

Perfectly said. And I agree!