The Remains Of The Day 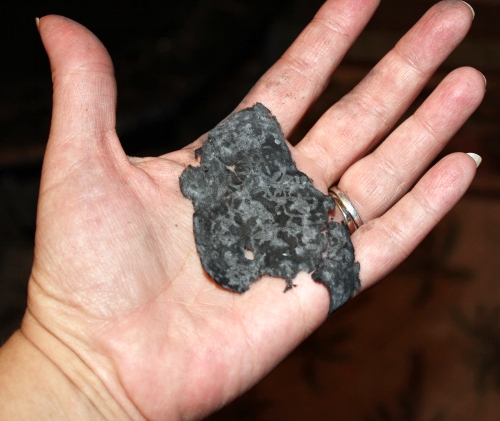 First of all, I want to thank everyone who took time to call me, send me e-mail, and post to my Facebook page.  This out pouring of love and concern from you all really has meant the world to me especially since R has been out of town working, and I just wanted to say thank you.

Also I want to assure you that at no point so far (knocking on wood here) have I personally been in any danger from the fire itself.

I think if you have a TV and turned it on, regardless where you are in the world you have probably seen some type of coverage of our fire.  People have told me from France, England, Australia and even India that they have seen it on their news.  The one comment that people keep making is how widespread it is.

Yes it is, however I want to take just a moment and put that into perspective for those of you who are not familiar with Colorado Springs.  I am sure you have seen that 32,000 people have been evacuated so far.  That does seem like a lot, and it is.  But we have roughly half a million people living combined in the city and the smaller outlying areas.

Also as of this morning over 18,000 acres have burned, but the majority of that is unpopulated forest.  Only a very small section of town was burned.  Which does not in any way minimize the loss we experienced, but it was all north west of interstate 25, and the vast majority of the city is east and south of that part.  So don't think that the entire city is on fire, it's certainly not.

I won't lie to you though, things took a very real and intense turn Tuesday afternoon.  We were all very nervous and scared.  We had winds of 65 mph blowing east which brought the fire back over the crest of the mountain and straight down into residential areas.  It happened in roughly 45 minutes according to the estimates I have heard.  I believe it too, because the gigantic cloud of smoke was on top of my neighborhood so fast.  We don't have any word yet on how many homes were lost.

What we do know is that no one was hurt, no one is missing, and the evacuations have been amazingly orderly and well executed.  Also the Red Cross, Care and Share and a whole variety of other agencies have stepped up to help us and be prepared.  The animal shelter is taking pets in so that people don't need to worry that they are being cared for while they are evacuated.  There are also places for larger animals to be cared for while their owners are displaced.  People are getting on the average of about 8 hours pre-evacuation notice, so people are having time to grab a few things that can't be replaced, important papers, photos and essentials.

As of right now, we have over 1000 fire fighters on the ground, planes and helicopters in the air and a convoy of military bulldozers arrived last evening to dig trenches.  While that sounds like a lot, it's really not.  Plus many of the fire fighters came here after battling the enormous fire two hours north of us for a couple of weeks.  They are dehydrated, exhausted and dealing with extreme, record setting temperatures on top of the fire.  Despite all that they are doing a phenomenal job.

President Obama is coming  Friday to declare us a federal disaster area.  We have already been declared a disaster area, but being declared a federal one will bring us more aid, which we desperately need.  They are estimating it will take until July 16th to get the fire contained, and how long after that it will burn is anyone's guess.  It's currently at 5% containment.

People in the city are really doing their part to help, there are tons of shelters set up in schools.  Businesses have turned offices into bedrooms...it's truly amazing at how everyone has stepped up.  There is literally no room at the inn either, hotels both here and in Denver are practically full to overflowing.  So hopefully that helps you a little bit with putting it all into perspective.

As for me, Tuesday really was pretty rough.  The smoke cloud, which I heard an estimation was billowing 30,000 feet into the air set directly down on top of my neighborhood almost 20 miles away from the fire thanks to the wind.  At about 4-5 PM it was so thick it looked like night.  I had an asthma attack, which I have not had one in over 5 years.  I had to go to the urgent care and have a breathing treatment, and they gave me a script for an inhaler.

I could see the flames of the other side of town burning after the cloud dissipated.  At that point it was moving so fast, and we really didn't know if the fire was coming our way or not.  Luckily it didn't cross the freeway.  I was home alone, R has been working in Utah.  Normally I am good in a crisis situation, but this was pretty tense for me. They had the freeway closed for a while, and I was nervous R wouldn't be able to get home today.  But luck was on our side and the freeway was open and pretty clear, so he made it home safe and sound.

Yesterday morning I had settled down and was about to go to bed when I saw something laying on my porch.  I picked it up and that's the photo you are seeing above.  Of course after I picked it up and photographed it they said on the news a half hour later if you find any of this stuff to not touch it because it could be asbestos or some other toxic thing, but I threw it away and washed my hands right after so I am sure I am ok.  It still scared me to think something could reach all the way to where I was and made me think about blowing hot embers, which is such a danger.

So until they get the fire contained I will be praying for no wind and lots of heavy rain which we desperately need, and that it does not turn and make it's way back into town.

It is horrific for you, I know the anguish, as we have those terrible bush fires here in Australia, often with loss of life. Hopefully the dozer's will be able to bulldoze a break. Take care.
Hugs
Kay

Wish You Were Here Mom said...

All the devastation, Kelly, it's truly heartbreaking. We often have wildfires here in Arizona, and though I feel terrible for those who have lost their homes, it's the animals who I feel the most concern for. My prayers are with the fire fighters, hoping they will be able to get these fires under control soon. Big hugs, Janice

Yikes on the asthma attack, I had one just before I graduated the year I lived in Saskatchewan because there were horrific fires to the north of our town, it totally doesn't help the angst levels!

Glad to hear you're safe, I have a friend who lives much closer who is 'packed just in case', and who has 3 small children, including a 3 month old baby, I hope that the aid brings in the help you need.

Does you friend have a place she can go? If not I am sure I have room for her. Things are a little messy right now, but I am sure it would be better than going to a shelter.

It must be so awful for people and being on your own is'nt the best situation, glad R is back. Hugs, Amanda x