Mermaids And The Bermuda Triangle 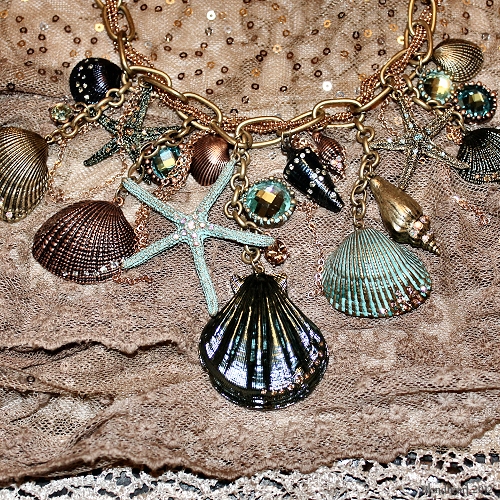 It's a rare day that I indulge in purchasing a piece of costume jewelry.   It has to be sterling, white gold or platinum so I don't break out.  Allergies are the bane of my existence.  I have found that I can get away with yellow or rose gold for short periods, and even occasionally what my Grandma used to refer to as "pot metal."

It's even rarer that I buy a big gaudy necklace.  Combined with allergies, making bears for three decades has left me with chronic neck issues and some days I can barely tolerate a simple chain with a charm.  Plus I am not that fond of most big gaudy necklaces.

There is an exception to every rule however.  Today when I was out shopping I ran across this piece.  Now in all fairness my photo does not do it justice.  I love ocean inspired pieces of jewelry for some reason.  I don't know why, because even though I have been boating and swimming many times, and snorkeling in Barbados, the ocean still scares the bejeebies out of me!  I have even been 180 feet under the ocean surface in a sub.  Anyway, the colors on this piece are incredible.  But the blues and greens are slightly iridescent so it reflected the camera flash a lot.  The shells that look black are actually a beautiful indigo blue and the large shell in the center is a lovely teal green, and not nearly as dark as it appears.  Each shell has either white or light amber rhinestones on it.  I just had to have it.  I have a girl day coming up Wednesday with my friend Carol and I intend to wear it...allergies and neck pain be darned!

After I got it home, I got to thinking about a comment I received last week after I got brave enough to post a picture on Facebook.  One of my friends said her daughter thought I looked like a mermaid.  It's the hair of course...but with this necklace I am sure I will really look like one now!  XD

I am proud to tell you that my diet program I was on technically ended today.  I ran out of drops and I lost 20 pounds!  I still intend to keep dieting, but I am not going to stay on just 500 calories a day.  I will be going up to 900, which for my height, weight and age is the recommended amount to lose weight.  It won't be quite as fast, but I am feeling confident.  Six weeks on this program really has changed how I eat as well as how fast I eat.  Now that might sound like a small thing, but for me it was HUGE.  I had severe issues with eating slowly going back to my childhood.  But I don't want to tell you that sad story...so suffice it to say that I have overcome a really intense mental obstacle, and I no longer feel the need to inhale my food or clean my plate.   It's truly amazing how what happens to you as a kid can carry on through life with you that you don't even fully realize it.  The impact these things have can be devastating and you aren't even aware of it.  So as hard as it was, I consider the program to have been a success.  I feel confident that I can go forward and eat the way I should and still lose weight.  Time will tell.

Now if you have been reading my Facebook page, you know that I have also been tackling R's little junk pile in the corner of the backyard and getting rid of it since the snakes love to breed there....plus I just don't like the junk pile.  Once I started, he picked up the reigns and hauled away the four tires that had been sitting there for 3 years.  There was also an old patio table.

When I get a new piece of furniture, I found that I was at a loss as to what to do with the old thing.  Goodwill doesn't take as much stuff as they used to.  Most of it isn't worth the effort or expense of a newspaper ad to sell, and honestly I don't trust people who use Craig's List.  You hear too many horror stories and since I am home alone a lot...well just no.

At any rate one day I had something I was going to have R haul away the next weekend.  I had no place to put it so I set it in the drive way in front of the garage door.  I can't stand doing that because I am always convinced it makes the house look like we are poor white trash to have things sitting in the driveway.  Three days later I went to the store and when I returned the thing I had set out there had vanished!  I thought this was awesome because that meant we didn't have to haul it away.

The next thing I had was an old BBQ.  R had gotten a new one for his birthday...so I got this idea...this time I would put a sign on it that said "Free."  I kid you not...3 hours later...gone!  Since then that section of the drive way has been dubbed The Bermuda Triangle.  I have learned that you can put literally anything in your driveway with a sign on it that says "Free" and it will vanish within hours!

Late last night I put the patio table out there with a sign on it, and at 6:21 this morning...I was just about asleep when I heard a tailgate slam shut.  I peeked out...GONE!  The Bermuda Triangle never lets me down!

Good for you. I love your Bermuda triangle. Congratulations on your weight loss.
Hugs

Loving the necklace and WTG on the weight loss. As for the triangle, we kind of have one of those here too!