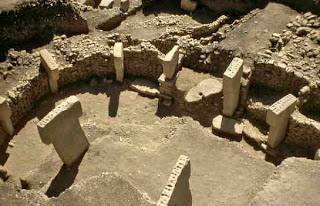 In the current accepted paradigm of history we were hunter/gatherers until the Egyptians came along and formed polite society with architecture, agriculture and things of that ilk. But every once in a while a tantalizing little piece of archaeology will pop up that seems to contradict that line of thinking. These things are usually shoved into a nook they don't really fit into with an explanation that doesn't work simply so we don't have to rewrite the history books, as in the case of Gobekli Tepe. Lets face it, humans are resistant to change even when it involves the past.

I like to watch a show that comes on The History Channel on Tuesday nights called "Life After People." The premise is that it shows what would happen to flora, fauna and the things that we left behind if we all suddenly vanished from this planet. It's sort of a redundant show because I cannot think of a single event that would erase 100% of humanity from the planet while leaving every other living thing and structure intact.

A few shows back they went as far as 10,000 years in the future. They said the only thing that would be left would be our stone monuments. Every other tiny bit of evidence of humanity would have broken down and been recycled back into the earth.

This kind of got me to thinking...if that's true, and it does make sense that it would be since mostly what we have of ancient cultures are stone and bone items...then what all from previous races living on this planet has been reabsorbed so to speak into the planet to be erased from the annals of history?

Perhaps civilization goes back much farther than we can even fathom. Imagine if there were people living in communities that hadn't discovered the great joy of erecting monolithic stone structures to leave their mark on the world yet. They could easily have vanished into the mists of a hazy history long forgotten by more recent societies.

Of course I know any scientists or archaeologists who would read this would of course say I am wrong without so much as the bat of an eye...but if history has taught us nothing else, it's that when we are sure beyond all shadow of a doubt that something happened a certain way, we inevitably find out we are wrong.
Posted by Kelly at 3:20 AM

I watch that show, too. Probably the one thing that could wipe us out, and only us, would be a super virus. Then, when we were all gone, it would be a stupid virus (or it would mutate for survival, of course).

I think even a super virus would have a few people who were immune to it though. It's an entertaining show.

I LOVE that show! It always gives me the creeps a little bit, but I can't STOP watching! there was a big spead in some magazine not too terribly long ago (a bit vague, huh!) that showed an amazing old home that had just been left to the will of nature. It was so beautiful I couldn't help but imagine myself living there... with ivy growing up my bedroom walls & moss on the floors. Sigh...

I agree Kim, I find something very beautiful about nature reclaiming a building.