Is It Really That Important?

I want to ask you something...has anyone ever said anything to you that was more important than someones life?  What about you, have you ever said anything to someone that was more important than your own life?
Now unless you're holding state secrets, chances are the answer is easy...it's no.
Yesterday I went out to run some errands and I had a close call.  I was in the right hand lane, approaching a stop light when it turned yellow.  I slowed down and stopped.  It wasn't a rapid stop, I didn't slam on my brakes.  In my rear view mirror I could see an SUV barreling down on my little car.  He was going way too fast.  I could also see that he was holding his phone above his steering wheel texting like in the pic below. 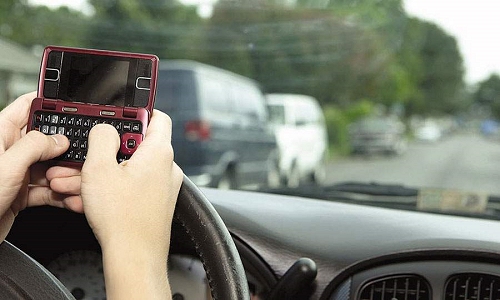 What he didn't see was that the light had turned and I had stopped.  In fact I was bracing for the crash.  I knew it was coming.  I couldn't do a thing to get away from it either.  Luckily at the very last second he noticed my car and swerved to the middle lane.  He missed me by mere inches!!!  He was going way too fast to stop though, he ran the red light and nearly got broadsided by a car that had the green light.  That car had to slam on their brakes so hard to keep from hitting him that the car spun out a little.  I am sure the driver of that car was as shaken up as I was.  I wish I could have reported him to the police, but he was going so fast that I couldn't get his licence number.  It's by the grace of God we all survived.
The thing I found myself wondering is what could have possibly been so important that he was willing to risk his own life and the life of others?  I have to tell ya, I have never had a conversation that was that important.
Now I told you the other day I got a brand new smart phone.  I also sent my first text.  I did it from my sofa.  It's hard to type on a phone though, even when you're sitting on the sofa.  I can't imagine doing it while driving.  When I am driving my cell phone is tucked safely in my purse.  If it rings, I will call the person back when I stop.
In Colorado we don't have a no texting while driving law yet.  I can't wait until the day we do.
It's kind of funny though, it used to be we liked to leave home to get away from being accessible to things for a little bit.  Now we seem to think we can't leave home without being accessible.  I still enjoy the freedom.  E-mails, phone calls, conversations...they can wait.  I know we live in an instant gratification world, but the one instant gratification we don't need is death. 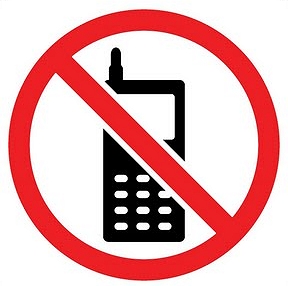 I implore you, don't use your cell phone while driving!  Your life and the lives of others may depend on it.  Is that conversation that important?
Posted by Kelly at 3:19 AM

Labels: no cell phones while driving, pay attention to the road, Texting and driving

what a lucky escape you had.
In the Uk we have no cell phone use while driving, but most days you'll see someone doing it.

Hope everything is fine at your end of the world though.
;-)

I agree, I would rather sit with a friend and have tea!

Oh my goodness! I'm so thankful that you and the person in the oncoming car is safe. I just don't get the whole thing with people talking and texting while driving. Unbelievable. Thanks for posting this important message.

Not just your life, but more likely, the lives of others... because it's never the a-hole who is driving and doing things they shouldn't who dies in these kinds of situations.

I'm glad you're ok... yeah, I think about this new technology all the time, and how ten years ago I would have left the house, cell phone free, and not thought twice about it... where as now, if I forget my cell, I'm overcome with this sudden panic of "What if something happens? What if my car breaks down?!"... it's really kind of crazy.

When I'm driving the thing is out of site, out of mind... but when did this sense of urgency to be connected arise?!

When my daughter was learning to drive, a friend of a friend was killed while texting and driving. It was a lesson hard learned by all the girls. I impressed on Laurel, that the phone stays off while driving....or ignore it if it rings. And I'm glad to say that this is what she has always done.

I don't even know how to text and I don't have a cell phone anymore either...personally I think they are a waste of time other than in an emergency...I never answered it when I was driving and if it was really important(it never was really important), people would call me back. I also hated paying for my landline which got really good reception and paying for a cell which most of the time I was cut off more times than not...I saw two accidents which involved cell phones and it's not worth someones life nor is it worth the cost...great post kelly!

Oh Kelly, I have to be honest I am close to tears right now. I am soooo happy that an accident was avoided.
People are so stupid! As some people know I was in a roll over crash this past summer, on an open road, on a clear sunny day. The lady said she didn't see our car, WHAT? I have to wonder what she was doing that she didn't see one of the few cars on this road... I will never know, and that is very hard for me since I am still dealing with pain, limited range of motion and am looking at surgery now and then months of PT. This accident has impacted my life and that of my family in such a huge way I would never want to see any of my friends go through what I have had to over these past 8 months. Our car flew through the air and rolled three times, her car stayed on the road and spun a couple of times...This is a very emotional subject for me and I could go on but I won't. Texting while driving isn't worth someone's life or the injuries that may occur. All I can say is please don't text and drive aaaaaand wear your seat belts! <3 <3 <3

Very telling story.
And well told to, I might add.
I have been guilty of this, not texting, but reading a text!!! And I saw a video posted on FB that changed me. I will not do it again. I am happy to read this, it reaffirms the video, and tells me to leave my phone in my bag. Thank you for the reminder.

Oh Kelly Jo, I remember your accident. I am sorry you're still having trouble from it.

For those of you who don't text and drive, and teach your kids not to...good for you!

Kathy, just don't do it!

The sheer stupidity of some people never ceases to amaze me. I am surprised he didn't have a couple of unstrapped kids in the car too.

Wow, glad you're okay. My mum got rear-ended at traffic lights and shunted half way across the junction by a little old lady who was distracted by the police car sitting in the layby near by. Thankfully it was a quiet time of night, but really, if that minor a distraction can cause an accident, I despair of people doing things where they deliberately ignore the road.