A Very Special Pair Of Shoes 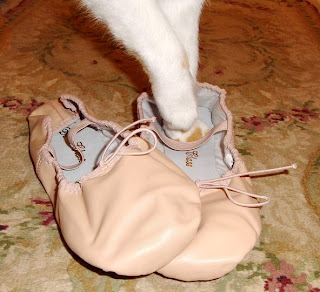 On December 27th I made a post called Boxes where I talked about making a New Year's resolution that involved a very old dream. I told you when what I ordered arrived I would let you know what it was. The package arrived today finally. Inside the box was a very special pair of shoes and an instructional DVD.

When I was a little girl I lived with my Grandmother for a large portion of my childhood. We were very poor. In fact she lived on a small pension of $300 a month. Even in the mid 60's that wasn't very much money. When you're a kid being poor isn't that big of a deal. You don't really know you're poor so I wasn't unhappy or really felt that I was missing out on a lot because I didn't know any different. Even if I had I doubt I would have cared. I always found plenty of ways to amuse myself, including dancing. I would watch old musicals on our tiny black and white TV with her and then twirl and dance around trying to imitate the beautiful women in their gorgeous gowns. The one thing she always wished she could afford was to get me ballet lessons. To be honest, I wished it too.

Every once in a while over the years, I have thought about that. I see women who have taken ballet as a child and they have a certain grace I always wished I had. Somewhere along in my thirties I really regretted that I hadn't done it, but of course at that age I was too old to start.

Perception is a funny thing. The minute you tell yourself you can't do something, you can't. The word can't is the kiss of death if you let it enter your brain in conjunction with something you want to do.

I started thinking about it again last month. Sure I am a lot older, stiffer, and chubbier than most girls who start...but so what. It's not like I dream of dancing Swan Lake or even performing in front of anyone. It's simply something I want to do for myself...because unlike Rizzo who decided to put her best foot forward and help me take the picture above...not all of us are born with the grace of a cat. When I put the shoes on today, I already felt more graceful and a little younger oddly...and I hadn't even done anything yet. But I know I can, and I WILL.

Your age should never let you stop yourself from learning new things and fulfilling a dream. So that was my resolution...to learn ballet. It might seem silly and you can laugh if you want to, I will probably laugh along the way with you. But at 45 I learned I am young enough to do anything I want!
Posted by Kelly at 3:25 PM

Wow!
I read (and loved) your post about the Boxes and wondered what you had in mind. Never would've guessed!
Sounds like a GREAT idea to me. I can imagine ballet lessons certainly would add grace and poise to your step and your movements.
Good for you, taking charge of your dream! You are so right about that word "can't". I bet you'll be a great example to someone in your classes!
Have FUN!!!
~alisa R. ^_^

Umm and I must mention that picture of such dainty little toes in those beautiful special power pink slippers ... Is perfect-perfect.

I am not sure I am ready to go out in public with this! *Giggles* But I have found that anything you want to learn there is a DVD for. Can you imagine me wearing a tu tu in a class with little girls! Trust me, no one wants to see that! There won't be a tu tu!

What a lovely story. Thank you for sharing..Kathi