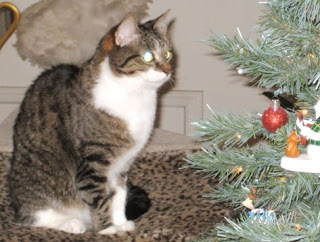 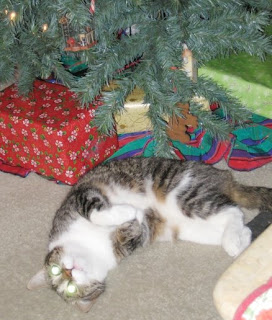 Even though I am feeling a little bit better tonight, Santa called to ask if I would guide his sleigh because my nose was so red it trumped Rudolphs! I declined however.

I really love Christmas. I don't get the excitement I used to, every year there are fewer presents and surprises under our tree but I think that's what happens when you start getting older and you don't have kids.

Besides, Christmas is about so much more than presents. It's a time of miracles and joy. Sometimes it even brings joy to those we wouldn't imagine it would. What I am about to tell you is 100% true. I am not embellishing or imagining and I have witnesses. You might not believe it, but that's ok because it won't change the fact of what is.

Over the years I have had a lot of pets. Some weren't the greatest, most were good and a couple were very special and even remarkable. Out of all the pets I have ever had, I have never had one that understood Christmas...except for Basil.

Basil showed up on my porch about two weeks after I moved into this house. I opened the door to go check the mail, and there he sat. A tiny grey tiger striped kitten. He wasn't afraid or crying, he was just sitting there calmly on the porch as if he was waiting. I asked him where he had come from, and proceeded to get the mail. When I went back into the house, he walked on in as if he belonged here.

I already had two cats and didn't really want another one so I tried and tried to find him a home. No one would take him, so he ended up staying. In retrospect I am glad he did.

When we had lived here about six months I had the pastor over to bless the house. He went with us room to room, sat in the circle reverently and then moved to the next almost as if he understood what we were doing. When we were done he promptly went back to sleep. The pastor said he had never seen anything like that, and he was rather amused.

Whenever I am sick, or the couple times I have had surgery Basil is always there, watching over me and trying to make me feel better. After my surgery two years ago he would come once an hour to sit on my chest and look me over very carefully. He would put his head down to my chest and listen, it took me a while to realize he was checking my vital signs. He would lay next to me and purr and talk trying to make me feel better. He never left my side for nearly six weeks until I was much better.

But later we discovered Basil loves Christmas. I cannot fathom what goes through his little feline brain, but I know he loves everything about it. He sits and looks at the tree in awe. He never touches it, he never tries to play with anything, he just stares at it. He runs back and forth with me when I decorate it. When it comes time to take it down he gets visibly depressed for about a week after and sleeps in the spot where it used to be moping. The other 51 weeks out of the year he is very happy.

He always sits with me to wrap presents and purrs and smiles. He is the only cat I have ever had that smiled. I always thought the Cheshire cat was merely a storyline vehicle til Basil arrived.

I have a tiny music box that has skaters going around a Christmas tree and Basil likes to watch it, he purrs and purrs while I have the lid open. I have other music boxes, but those don't interest him.

Every year I track Santa on the Norad site and Basil sits on my knee and watches with rapt attention. He will sit and stare at the TV if a Christmas movie is on, but he never pays any attention to the TV any other time.

How he knows the difference I don't know. Every once in a while I have to wonder if he was a guardian angel sent to watch over us. I know that's probably a silly notion...all I know for sure is that he feels great joy at Christmas, and for him it's not about presents or parties or food. It's simply the time of year. Maybe we could all take a lesson from my funny little cat who has more joy in his tail than most of us have in our whole bodies and takes such pleasure in the season.

So on behalf of all us, especially Basil...I wish you all a very Merry Christmas filled with delights, miracles and joy!
Posted by Kelly at 11:05 PM

Basil is truly special! We've spent the last 3 years with our own cats too and they seem to sense the Christmas spirit: they are more loving, talk more and definitely smile!

I think pets understand a great deal more than we give them credit for. I am glad to know I don't have the only one who loves Christmas! ^___^

Ok, Basil has won my heart. I am not a cat person, but this story you told has warmed my heart to cats. I do know dogs!!! And I really do believe they are here to make us understand unconditional love.
I have so enjoyed your story and I wish you and yours a Merry Christmas!

Awww Kathy I am glad you liked it! I have three dogs and three cats. I am not sure how I got so many...but they are all wonderful in their own ways. We have had Basil 9 years now, and he is very sweet and special!

Grin...those of us who are "one-with-felines" are smiling in our hearts over Basil's wonderful spirit!

There is a pure honesty about cats that appeals to my soul~ even when you know they are effortlessly controling everything in their lives (especially us!)