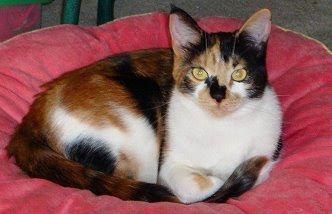 Years ago when I had surgery, I discovered that sleeping with a body pillow was much more comfortable and kind of acted as a protective barrier for my stomach while I healed. After I healed, I had grown used to sleeping with it. I usually face it and throw my top leg over the pillow.

When I brought Rizzo home she was only 5 weeks old. She was an ornery little scrap of fur who fell instantly in love with R the moment she laid her big golden eyes on him. While she decided to be his cat, she also understood that I was the authority figure and the one to learn how to do basic things from, like where to eat and what not to climb or scratch on. While she respected my authority, she wasn't that fond of me. Gypsy couldn't stand her, and wanted nothing to do with her. This included teaching her how to be a cat. That's probably for the best because Gypsy is an odd animal with strange habits unlike any cat I have ever owned. She is funny though! Good natured Basil took it all in stride, but he isn't much of a teacher either.

When Rizzo was approaching a year old, she finally decided I wasn't so bad, and started sitting on my lap and sleeping with me more. I also noticed that she started picking up habits from the other cats, dogs and even me. I suppose this is because she came to our house at such a tender age that she wasn't really sure which role model to follow.

One morning I went to bed, got into my usual position on my side, and threw a leg over the body pillow ready to go to sleep. Rizzo crawled in bed, laid down on the body pillow and threw a hind leg over my leg as if it were her body pillow. I thought it was funny and just a rare occurrence. She has slept that way almost daily since.

It's kind of funny the things animals pick up from the other members of their household. I don't think it's uncommon for them to learn from each other, but it is odd to me that they pick up things from the humans in their lives.

Gypsy, who has always been "Mom's baby" has all sorts of odd habits she has picked up from me too. When I pluck my eyebrows I stand in the bathroom and lean over the sink so I can see in the big mirror. Gypsy is always right there standing on the counter on her hind legs leaning over looking into the mirror as well. I am sure she has no idea what I am doing, but if I am doing it...then so should she. She also thinks that everything I own is hers. She loves my makeup and makeup brushes, and my jewelry. I have often found her with these things in her possession. When I take them away, she gets really annoyed. Her favorite thing to take is a particular diamond ring I have. I have caught her trying to figure out how to get it on her paw on several occasions. I guess that makes sense to her since that's where I wear it. What can I say...diamonds are a girls best friend right?

My two dogs, Buster and Jazzy have a couple habits they have picked up from us as well. I also noticed they have a few things they picked up from the cats. Luckily they all get along really well together.

I guess if you're not an animal person you can't really find the humor in the things they do, but I am a great animal lover and it's so fun to watch the odd personality quirks they have and that they learn from each other and us.
Posted by Kelly at 10:24 PM

I love hearing the kooky things other people's pets do.

I've also heard several stories from cat owners who had cats that did very specific things (especially concerning morning bathroom primping rituals) and then when those cats died, they got a new one and the new cat, without being there long, or without prompting, did the same things.

My cat has taken to petting himself when he wants to be petted... he reaches up and strokes his own head in a "good boy" manner, then stares at the person he expects to pet him... very meaningful, direct eye contact... and if the person doesn't get it, he moves a little closer, pets himself again, and s-t-a-r-e-s!

That's so funny Heather! I know what you mean about learning things that cats did that were there before. Rizzo has somehow picked up quite a few habits Shelby had. Shelby passed away before Rizzo arrived though, and the other cats don't have those habits. They are/were both tortie calicos though so maybe it's just something in that breed?