As promised, I said there would be a new feature on Mondays. Most people aren't that fond of Mondays, so I thought why not kick off every week with something happy and fun. So the new Monday feature is going to be Monday Love/Inspiration. It will be something I love or something that inspires me...or as in the case of today, both! With some luck it will inspire you too. To start off, I want to cover Paris. 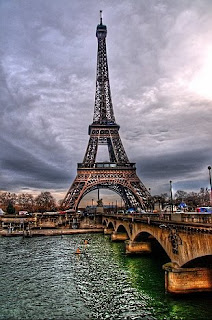 When I was in 8th grade we had a French foreign exchange student from Paris. She laughed loudly in a deep throaty laugh and was a little rude, although I think that was from the translation more than intent since she didn't speak english that well. She wore the strongest spiciest perfume I have ever smelled, and always wore red lipstick even at that age. She also had an wild and amazing sense of style. While we were only friends in passing, I was absolutely fascinated by her. She seemed so effortless somehow, while all of my American friends and I were trying so hard at that age to figure out who we were.

Even before that Paris seemed to be a mystical sort of place. It's called the City Of Light and known for romance, how could that not be magical? My desire to go there has carried over into my house and my life in little ways. If you were to walk into my bedroom, the first thing that would most likely catch your eye would be the 4 foot Eiffel Tower statue I have on my dresser. I also have art of Paris on the walls in the family room. While I have been up in the half scale model in Las Vegas, one of my fondest wishes is to see the real deal.

I am not sure if it would be the way I imagine it or not, but I suspect it would be wonderful in ways I haven't imagined. Quite often I fall prey to something from or about Paris. I have a pair of red flower earrings that came from there that I simply adore. 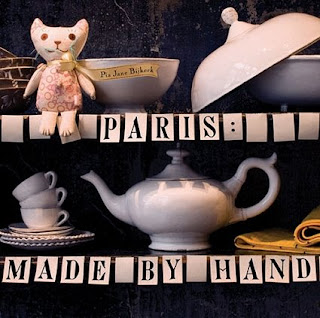 Recently I picked up a book that caught my eye. It's called "Paris: Made By Hand" by Pia Jane Bijkerk. It covers 50 shops in Paris that sell handmade goods, or items to make your own. It's such a charming book, the pictures are lavish and it was filled with so much inspiration that I couldn't help but drink it in like cafe' au lait! She has even included website addresses for these wonderful shops.

Everything about Paris fascinates me, the architecture, the food, the culture, those fabulous Parisian women who walk everywhere and dress so chic without even trying. I know some day the dream will become a reality and I will go there. I wonder where those Parisian women dream of going?
Posted by Kelly at 4:07 AM

Lovely to have a Monday topic. I've never been to Paris, maybe one day but its not really on my list of to go places. I sometimes think because its so close/easy to visit I would love to go somewhere more far flung.

Has the Coco Chanel film come out in the States yet? Bet that would be one you would enjoy.