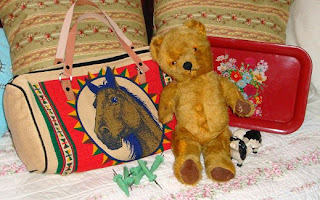 Yesterday could only be described as a comedy of errors. I had my day planned perfectly. R was going to be out of town for the night and I had to go get my yearly mammogram at 1:30. So I thought I would get up at noon, get ready and go do it. Then grab a salad somewhere and head off to this massive antique mall we have.

I have been pretty good about curbing my shopaholic ways lately and I haven't been antiquing in ages. I had been feeling the pull to go there for about a week. I just knew some wondrous treasure was awaiting me.

I set my alarm for noon and asked my Mom if she could call me as a back up measure since sometimes the cats walk on the alarm and shut it off. I had to leave the phone on the hook in order to get my call. Normally I take it off the hook when I sleep since most of the world has no respect for day sleepers.

I stayed up a little too late finishing my book, and then I couldn't sleep. So I didn't get to sleep til nearly 8:30 am. The phone rang at 9:05 with an obnoxious man who called me a liar despite not knowing a thing about me. I was rather upset over it and didn't get back to sleep for nearly 45 minutes. Just as I was finally dozing off again the neighbors workmen who are putting in their new lawn had a small forklift taking things to their back yard. The beeping noise kept me awake for quite a while. At 10:30 as I was dozing off again the phone rang. It was my Mother, she thought I had to be at my appointment at noon and was calling to wake me up. I am sorry to say I was a little rude to her out of frustration for which I apologized later. I laid down again and dozed off for a third time only to have the doorbell ring and the dogs start barking like mad at 11:10. The utility guy needed to replace something on our meter. At this point I gave up.

I came downstairs, coffee in hand and looked at myself in the mirror. My eyes were so bloodshot I looked like I had been on a three day bender..and quite frankly I probably would have felt better if I had. Sleep deprivation is evil.

I called the medical center and rescheduled the mammogram for Friday. There was no way I was going to be able to drive across town in my current state. I called R, told him what all had gone on, took the phone off the hook and went back to bed declaring the day a total bust. I had just laid down when the doorbell rang again (insert cussing here) only to discover it was a salesman who had ignored my no soliciting sign. After that it was all quiet and I finally managed to get four hours of sleep. I got up and did some housework and yes I WORKED ON A BEAR!

I went to bed this morning at a normal time, slept for about 9 hours and got up refreshed. I decided to go ahead and go to the antique mall today. I probably should have gone grocery shopping instead but I just wanted to do something fun.

The above picture shows my haul. I am proud to say those five things including that lovely old bear only cost me 78.00. The purse and the cow aren't old but I liked them anyway. I saw many more things I could have taken home, but I tried to behave myself. All in all today was a much better day and tomorrow I will go do the rest of the things I should have done yesterday.
Posted by Kelly at 5:23 PM